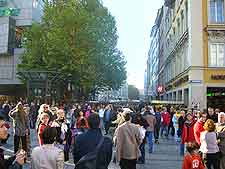 Shopping in the city of Munich is an enjoyable pastime and you will have no trouble finding quality souvenirs of your holiday here. Whether you are looking for traditional Bavarian clothing, beers steins and 'mass' glasses, delicious filled chocolates, or simply a newsagents, you won't have any trouble finding somewhere to spend your money. For souvenirs, the Am Platzl area of Munich is always a good bet, together with the Maxvorstadt and Schwabing districts, while for fashion stores, head to the Gärtnerplatz Quarter.

A great way to fully experience local German shopping is to visit one of Munich's seasonal markets. Popular choices include food markets selling local produce and flowers, flea markets where a range of bargains and collectibles can be found, and also the Christmas Market (Christkindlmarkt), which is held each December and always draws crowds of people, despite many of the items being rather pricey. 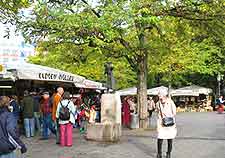 Head to central Munich for the best shopping, where many major department stores and high-street shops reside. For the best in fashion and clothing accessories, head to the Brienner Strasse, Maximilianstrasse, Residenzstrasse and Theatinerstrasse, all of which have more than their fair share of boutiques, designer names and shopping opportunities in general.

The Maximilianstrasse boulevard is particularly notable and known locally in Munich as a luxury shopping district, where many excellent jewellers can also be found. Further fashion stores and smaller local boutiques in Munich surround the Gärtnerplatz, the Glockenplatz, Haidhausen and Schwabing areas, and this is a great spot for some serious window shopping. 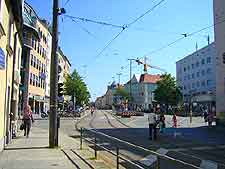 For the best high-street shopping in Munich, visit the pedestrianised streets around the Kaufingerstrasse, Neuhausser and also the Marienplatz, where a number of prominent department stores can also be found, often featuring their own food hall and restaurant. The Fünf Höfe shopping complex is known for its historic exterior and modern interior, where a range of shops stand alongside cafes and eateries.

The best markets in Munich include the popular Viktualienmarkt food market, where many local delicacies await, Monday to Saturday, including plenty of tasty German sausages, hot snacks and other shopping treats. Held each year at the end of April, July and October, the Auer Dult flea market is a combination of literally hundreds of market stalls and traditional fairground rides, and lies in the Au area of Munich, while the Magdalenenfest dates back to the early 18th century and features huge numbers of traders, which gather in the Hirschgarten area each July.