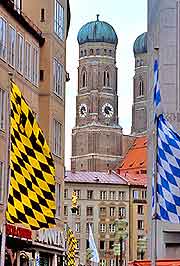 Munich is a city full of life and energy, where there are always plenty of things to do whatever the time of year. Festivals and events in Munich vary greatly, ranging from huge outdoor events held within central parks, particularly at the acclaimed Olympic Park (Olympiapark), such as the Sommerfest Olympiapark (Summer Festival) each August.

Not to be missed is one of the city's most famous festivals, the Munich Beer Festival, otherwise known as the Oktoberfest, when literally millions of visitors descend on the city.

Also look out for the regular concerts at the Philharmonie concert hall, where the Munich Philharmonic Orchestra often perform to huge audiences, and also the city's many trade fairs, which are regularly held at both the MOC (Munich Order Centre) and the New Munich Trade Fair Centre.