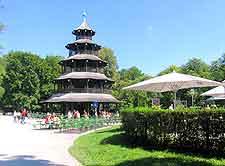 The Munich cityscape comprises many dramatic historical buildings, and yet amongst the architecture are a number of green parks, parklands and landscaped gardens. Visitors to Munich should not overlook the Englischen Garten (English garden), where summer beer gardens are a definite highlight.


Various waterways are scattered around the city of Munich and offer the perfect place for an afternoon stroll, with benches often interspersed along the way. Munich's most noteworthy parks and gardens are displayed here. 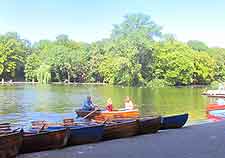 Address: Englischer Garten 2, D-80538, Munich, Germany, DE
Tel: +49 089 386 66390
The perfect place for an afternoon stroll, the Munich English Garden, often better known as the Englischen Garten, dates back to the latter part of the 18th century and is located between the Altstadt and Schwabing districts, and also the Isar River. With paddle boats on the Kleinhesseloher See lake, naked sunbathing, beer gardens, green lawns and plenty of secluded seating areas, it is even possible to surf here, with man-made waves being a major attraction on the adjacent Isar River. The gardens cover more than 250 acres / 100 hectares and offer breathtaking views of the Munich cityscape, which can be enjoyed from the top of the Monopterus Hill
Open hours: daily - dawn to dusk
Admission: no charge 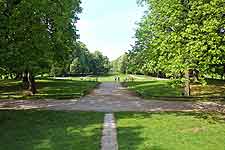 Address: Karl Theodor Strasse, Petuel-Ring, Munich, D-80807, Germany, DE
Full of mature trees and landscaped areas, Luitpoldpark was first established some 100 years ago, being donated to the city of Munich by Prince Regent Luitpold. Today, the parkland features a pavilion complete with restaurant, plenty of open spaces and walking trails, and a historic column remembering this gift. The historic Bamberger House (Bamberger Haus) is a further highlight, as are the 90 lime trees, which were planted to commemorate the prince's 90th birthday.
Open hours: daily - 24 hours
Admission: no charge 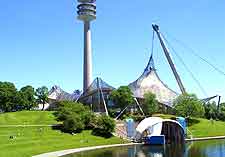 Address: Spiridon-Lois Ring 21, Olympiastadt, Munich, D-80809, Germany, DE
Tel: +49 089 3067 2414
Despite the Munich Olympic Games taking place more than 35 years ago, the Olympic Park (Olympiapark) still plays an important part of city life. Much of the park itself is dominated by the striking Olympic Tower (Olympiaturm), which is almost 300 metres / 985 feet high and boasts impressive views and even a revolving restaurant. Other highlights include the Olympic Stadium itself, together with a large swimming centre, tented area and even an ice-skating rink (Olympia Eissportzentrum. Many seasonal events take place at the Olympic Park, including fireworks displays and outdoor concerts.
Open hours: daily - dawn to dusk
Admission: charge 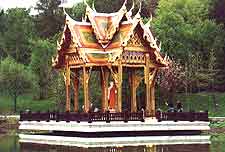