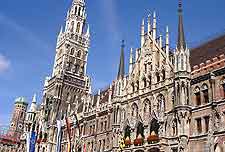 The historic buildings, monuments and landmarks in Munich are everything that you would expect, and so much more. Ranging from grand palaces to towering town halls, medieval city gates and an enormous university complex, Munich's many landmarks are varied to say the least.

Within the Bogenhausen district, the modern, rocket-like Hypo Hochhaus structure dominates the skyline, while in the Munich Olympic Park (Olympiapark), the Olympic Stadium is quite unmissable. For others, the extremely popular Hofbräuhaus beer hall is a particularly important landmark in its own right and its beer garden and large hall are almost legendary. 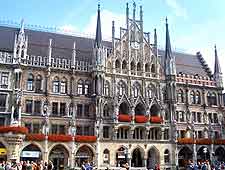 Address: Marienplatz 8, Munich, D-80331, Germany, DE
Tel: +49 089 2 3300
One of Munich most famous city landmarks, the New Town Hall (Neues Rathaus) dominates the area with its striking architecture. Located to one side of the bustling Marienplatz and known for its Gothic-style facade and tall tower, which is around 80 metres / 260 feet in height, construction of the Neues Rathaus began in 1867 and lasted just over 40 years. Today, the New Town Hall is best known for its clockwork figurines, which perform twice daily.
Open hours: Monday to Thursday - 09:00 to 16:00, Friday - 09:00 to 13:00
Admission: charge 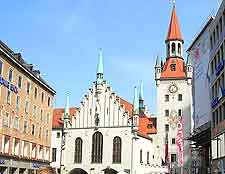 Address: Marienplatz 15, Munich, D-80331, Germany, DE
The Old Town Hall is famed for its dramatic architecture and tall clock tower, which was first built at the end of the 12th century. A particularly notable landmark on the Marienplatz and close to Munich's New Town Hall (Neues Rathaus), the Altes Rathaus was completely renovated some 40 years ago and is now in a good state of repair, once again standing proudly in the square.
Open hours: daily
Admission: charge 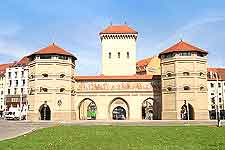 Address: Tal 50, Munich, D-80331, Germany, DE
Tel: +49 089 22 3266
Built in the early 14th century, the Isartor City Gate is especially significant in Munich, being the most historic of all the city gates. Over the years, this stone gateway has been restored and renovated a number of times and today is home to a small museum celebrating the life of German actor and comic, Karl Valentin.
Open hours: Monday, Tuesday, Friday and Saturday - 11:00 to 17:30, Sunday - 10:00 to 17:30
Admission: no charge 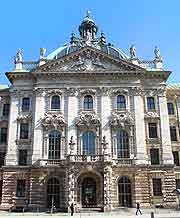 Address: Elisenstrasse 1, Maxvorstadt, Munich, D-80335, Germany, DE
A grand building sited along the Elisenstrasse, the Justice Palace features an imposing exterior, which is a successful mixture of both Baroque and Renaissance style architecture. Built at the end of the 19th century, this local landmark is hard to miss, featuring an eye-catching pale roof complete with crowning dome.
Open hours: hours vary
Admission: charge

Address: Burgstrasse 8, Munich, D-80331, Germany, DE
The medieval Alter Hof Palace was founded at the end of the 12th century and lies on the north-eastern side of Munich. Housing the city's local government, the palace is also home to an excellent restaurant and many beautifully restored features, including a particularly prominent bay window and a classical facade.
Open hours: daily
Admission: charge 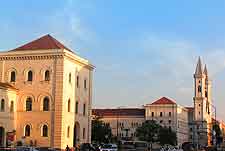 Address: Geschwister-Scholl-Platz 1, Maxvorstadt, Munich, D-80539, Germany, DE
Tel: +49 089 2 1800
The massive complex that is Ludwig Maximilians University of Munich dates back more than 500 years and moved to its present site at the beginning of the 19th century. With almost 50,000 students and many historical buildings, the university boasts 18 different faculties, excellent research facilities and beautiful gardens, complete with stone fountains, large trees and plenty of flowers to go round.
Open hours: Monday to Friday - 07:00 to 22:00, Saturday - 08:00 to 12:00
Admission: no charge 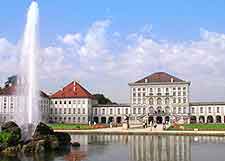 Address: Schlossrondell, Nymphenburg, Munich, D-80638, Germany, DE
Tel: +49 089 17 9080
A city landmark of enormous proportions, Nymphenburg Palace simply has to be seen to be believed. Construction of the palace began in 1664 and was completed just over ten years later. Surrounded by parkland with a large central lake, Munich's breathtaking Nymphenburg Palace contains many Germany treasures, including antiquities, period furniture and historic paintings. Many of the rooms are decorated in the Neo-classical or Rococo style and also of interest, the court stables are now home to an impressive museum, dedicated to ancient carriages.
Open hours: daily - 10:00 to 16:00
Admission: charge