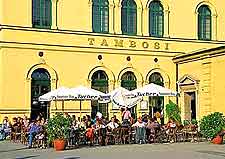 A city known for its thriving street cafe culture and numerous restaurants offering courtyards and al fresco dining a plenty, Munich is a foodie's delight. Munich boasts an array of fine dining experiences, with a particularly diverse and worldly selection of cuisines on offer.

During the summer months, many visitors to Munich choose to frequent the city's numerous beer gardens, where you can combine a cool stein of local brew with hearty German fare. A popular alternative to restaurants in Munich, the best beer gardens can be found around the Hirschgarten area, and also within the Englischer Garten park, in the true heart of the city. 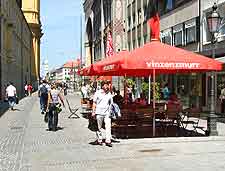 The southerly city of Munich is full of traditional Germany restaurants and many local Bavarian dishes await. These include grilled pork, bratwurst and pinkelwurst sausages, dairy-based food and hearty winter stews. Local specialities available at restaurants in Munich include the following: 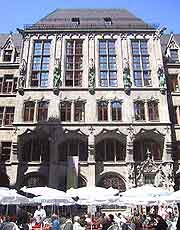 Around the city of Munich, many restaurants are concentrated in district clusters, and this is particularly so within the Altstadt (Old Town) area. A mixture of both fine dining and cheap eats are to be found along Frauenstrasse, Marienstrasse, Neuhauser Strasse and Residenzstrasse, and also around Old Town Munich's Marienplatz, Platzl and Promenadeplatz areas.

Also within this vibrant part of Munich, many inexpensive places to eat are to be found within the centrally located department stores. These include several dining options within the Müncher Suppenküche store on Schäfflestrasse and the Kaufhof department store next to the Karlplatz, where choices range from a bakery to a popular seafood restaurant.

Further restaurants await you around the districts of Haidhausen, Ludwigsvorstadt, Neuhausen, Schwabing and Nymphenburg. Also close to the Munich Hauptbahnhof are a huge selection of inexpensive fast-food restaurants and outlets, where pizza and doner kebabs rule the dining scene, being in plentiful supply along the nearby southerly Bayerstrasse.

For tourists visiting Munich, two dining options stand out from the crowd and are worth searching out. The city's popular Viktualienmarkt food market offers a true taste of the local culture and takes place every day, with traders selling a mixture of the area's produce, specialities and hot snacks. Other prefer to sit back, relax and enjoy the stunning views of the Munich cityscape, available from the rotating restaurant at the top of the Olympic Tower, which stands almost 200 metres / 656 feet above the ground.