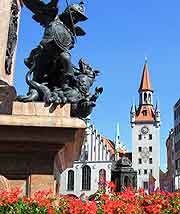 A superb tourist destination and full of attractions, the city of Munich offers enough to keep you fully occupied throughout the duration of your stay. However, don't overlook the many attractions just a short drive outside of central Munich, which include historic medieval German towns and friendly, small cities. Particularly popular with families is nearby Legoland, which lies around 78 miles / 126 miles to the west of Munich and is a great amusement park, complete with exciting rides and other fun attractions.

Especially notable is the Neuschwanstein Castle, which was the actual inspiration for the famous Sleeping Beauty Castle within California's Disneyland attraction and is surrounded by breathtaking Bavarian countryside. Also near to Munich, Linderhof Palace stands next to Oberammergau and boasts breathtaking landscaped gardens where you will find the rather unexpected Venus Grotto. 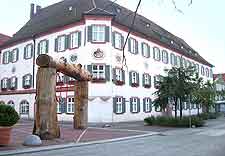 The nearby town of Erding can be found around 56 km / 35 miles north-east of Munich and the district's capital. Close to Munich Airport, Erding is relatively small in size, with a population of approximately 35,000 inhabitants, and yet does have the feeling of an international city. Attractions within the town of Erding include the spectacular Therme Erding thermal spa complex, which is amongst the best on offer in the whole of Germany, the Friday Bauernmarkt (Farmers' Market), Stadtpark and its intimate zoo, and a number of events, such as the annual Jazz Festival and Beer Festival. 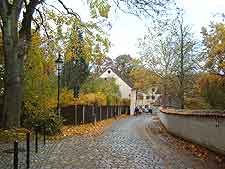 Lying just 19 km / 12 miles north-west of Munich, the town of Dachau has become a popular day trip and has much to offer visitors. Of particularly interest are the many attractions scattered around Dachau's historic town centre, which include an eye-catching 18th-century castle. Also worth a look is the town hall, the Dachau Concentration Camp memorial site, the marshland area of Dachauer Moos, and Dachau Palace, a magnificent medieval castle with beautiful surrounding gardens. 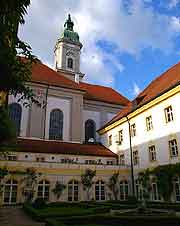 A small city with a population of around 50,000 and located a mere 40 km / 25 miles north-east of Munich, Freising stands alongside the Isar River. Freising is known for its two imposing hills, each of which is home to its own attractions, which include a castle, cathedral, a historic brewery and many archaeological treasures.

Particularly close to Munich, the town of Starnberg is situated to the south-west and within the region often referred to as 'Five Lakes Country. Regularly attracting visitors from nearby Munich, Lake Starnberg is the main highlight here and features many water-based recreational attractions, including pleasure boats available for hire, offering breathtaking views of the Alps and the many waterside mansions. Also located within Starnberg, the Buchheim Museum is of interest and boasts an impressive collection of fine art.