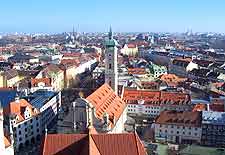 One of Germany's most appealing cities, Munich contains a successful mixture of architectural styles, with many of the most historical buildings standing within the Altstadt district, otherwise known as Old Town Munich. Walking tours of the Altstadt district are a great way to gain your bearings, starting at the Marienplatz and passing the Neus Rathaus (New Town Hall), Max-Joseph-Platz, Odeonplatz, Karlsplatz and the Viktualienmarkt, one of Munich's most popular food markets.

In total, the German city of Munich is split into a number of main districts, each of which is divided further into a total of 25 separate boroughs (Bezirke). Munich's main districts and most inviting neighbourhoods are explained below. 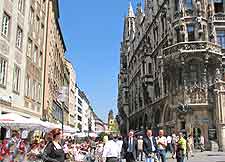 The Altstadt district offers plenty of medieval charm and many outstanding Baroque-style buildings, which stand alongside more dramatic, modern structures. Once surrounded by historic walls, Old Town Munich is easy to walk around, being extremely well pedestrianised. Many outstanding sights are available here, plus an array of shops, eateries, bars, museums, theatres and churches, such as St. Peterskirche (St. Peter's Church), which boasts superb views of the area. During the summer months, the many beer gardens quickly fill up, while others prefer to sit around Munich's centrally located Marienplatz and enjoy the street entertainers. 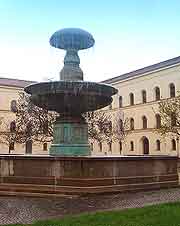 Bursting with an outstanding selection of cultural attractions, which include many of Munich's best museums, the Maxvorstadt is also a great place to eat out, with many eateries and pubs serving inexpensive German fare. The Ludwig Maximilians University of Munich is located nearby and therefore this neighbourhood has a strong young vibe, being frequented by many of the university's students.

A colourful district, which is brimming with eateries, delicatessens, boutiques, galleries and cobbled lanes, Haidhausen boasts a definite French character. This has become a particularly wealthy part of Munich and many of the most stylish buildings surround Rosenheimer Platz, a large public square located close to the Deutsches Museum (National Museum). Also nearby is the modern Gasteig Cultural Centre, where the Munich Philharmonic Orchestra regularly perform to large audiences. 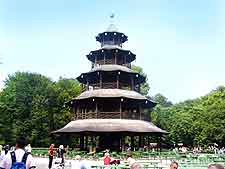 With a strong Bohemian flavour and a thriving cafe culture, the Schwabing district is often referred to as the 'old artists' quarter'. Many local speciality stores reside in this colourful neighbourhood of Munich, where you can purchase antiquities, books, CDs, vintage clothes and designer fashion accessories. The eastern side of the Schwabing district is dominated by the English Garden (Englischer Garten), where lush planting, bright flowers and green lawns await. 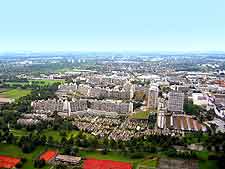 This part of Munich dates back to the early 1970s, when it was specifically developed for the Olympic Games, which were hosted by the city in 1972. The Olympiapark complex is the highlight, where many leisure activities take place, including concerts. Standing high above the Olympic City district and offering spectacular views, the Olympic Tower dominates the area.

The attractive neighbourhood is where many of the most breathtaking houses are located, alongside galleries, trendy shops and fine dining at its best. An affluent area with elaborately decorated villas, contrasting with most modern architecture from the mid-20th century, the Bogenhausen district is dominated by the futuristic, shiny silver Hypo Hochhaus skyscraper, which is more than 100 metres / 328 feet in height. 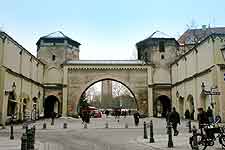 Much of the city's Sendling area is fairly industrial and commercial. Many visitors come to this district for the enormous morning market alone, where fresh local produce can be found at its best, being sold at bargain prices.

The Theresienwiese district is never more popular than at the end of September and the beginning of October, when literally millions of people descend on the area for the world-famous Munich Oktoberfest beer festival. Lasting two weeks, these festivities are simply unmissable and if possible, should be timed to coincide with a visit to the city.