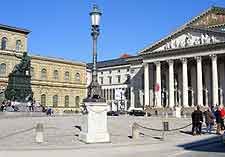 With tourist attractions for everyone and plenty more besides, tourism has never been more important in Munich. As such, tourists visiting Munich will find that they are extremely well catered for, whether they are exploring the attractions at the city's Tierpark Zoo (Hellabrunn Wildlife Park), or attending a concert at the magnificent Bavarian State Opera House (Nationaltheater), where there are performances almost every single day of the year.

Other tourist attractions within the German city of Munich range from swimming pools and sports facilities, to riverside beach areas and beer gardens, together with a planetarium, innumerable theatres and cinemas, and also bustling city markets. Munich's tourist attractions and explained here. 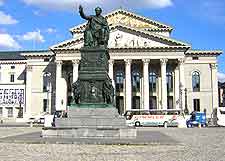 Address: Max-Joseph-Platz 2, Munich, D-80539, Germany, DE
Tel: +49 089 21 8501
With classical architecture at its finest, the eight columns at the dramatic entrance to the Bavarian State Opera House make this building instantly recognisable. Built in the early part of the 19th century, Munich Opera House, or National Theatre as it is otherwise known, has become one of the city's most famous buildings and has needed to be rebuilt twice, following fire damage and the bombing raids of WWII. Today, this grand theatre regularly features an array of musical events, with the summer Munich Opera Festival each July being a definite highlight and one of the theatre's main seasonal attractions.
Open hours: box office open Monday to Friday - 10:00 to 18:00, Saturday - 10:00 to 13:00
Admission: charge for events and guided tours

Address: Rosenheimer Strasse 5, Haidhausen, Munich, D-81667, Germany, DE
One of the region's largest and most important concert halls, the Carl-Orff-Saal often simply goes by the name of the 'Gasteig'. Regularly hosting large concerts of various descriptions, other attractions at the Carl-Orff-Saal Concert Hall include frequent functions, festivals and events - including the extremely popular Filmfest, and plenty of nearby restaurants and bars.
Open hours: daily, hours vary
Admission: charge for events 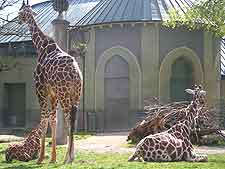 Address: Tierparkstrasse 30, Thalkirchen, Munich, D-81543, Germany, DE
Tel: +49 089 62 5080
The Hellabrunn Wildlife Park (Tierpark Hellabrunn) is a popular family attraction and is often referred to as Munich's 'geo-zoo', comprising distinct zones where animals are grouped according to continent. In total there are more than 5,000 animal attractions and almost 500 different species. Firm favourites include elephants, rhinos, deer, aviaries, large aquariums and a petting zoo area with friendly animals. Many of the enclosures are naturally landscaped and allow you to enjoy the animals without bars or cages.
Open hours: daily, April to September - 08:00 to 18:00; October to March - 09:00 to 17:00
Admission: charge, concessions

Address: Cosimastrasse 5, Bogenhausen, Munich, D-81925, Germany, DE
Tel: +49 089 911 790
A popular family attraction, children will enjoy the indoor wave pool at Cosimabad, while for the grown ups, there is a sauna, Jacuzzi and many more relaxing options. A sunbathing area is also provided for those wishing to simply soak up the rays.
Open hours: daily - 07:30 to 22:00
Admission: charge

Address: Max-Joseph-Platz 3, Munich, D-80539, Germany, DE
Tel: +49 089 29 0671
For a taste of affluent royal German life from the past, pay a visit to the magnificent Residenz Palace, where you will find crown jewels, an outstanding collection of Egyptian art works and treasures, and also a large concert hall. Residenz Palace dates back to the end of the 14th century and also features a number of attractions within the surrounding gardens, such as grottoes, fountains and formal landscaping.
Open hours: Tuesday to Sunday - 10:00 to 16:00
Admission: charge 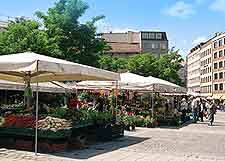 Address: Bavariafilmplatz 7, Geiselgasteig, Grünwald, Munich, D-82031, Germany, DE
Tel: +49 089 6499 2304
On the southerly outskirts of Munich and in the Grünwald area, the Bavaria Film Studios has long been one of the main family attractions. Over the years, many films and television shows have been shot here. Visitors will enjoy the fast-action stunt shows, the breathtaking special effects and the diverse range of German film memorabilia.
Open hours: Monday to Friday - 10:00 to 15:00
Admission: charge, concessions 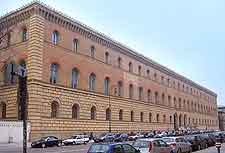 Address: Ludwigstrasse 16, Maxvorstadt, Munich, D-80539, Germany, DE
Tel: +49 089 28 6380
Much more than simply a huge collection of books, Munich's Bavarian State Library features eye-catching architecture and a number of impressive attractions inside. The country's biggest brick building, visitors often come here to simply marvel at the architecture and huge staircase. Others enjoy the literary attractions, with millions of books awaiting. Also at the Bavarian State Library you will find paintings, prints, many important local documents and various exhibitions.
Open hours: Monday to Friday - 09:00 to 19:30, Saturday - 09:00 to 16:30
Admission: no charge 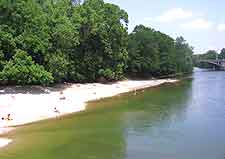 Address: Thalkirchen, Munich, D-81371, Germany, DE
Although Munich is full of outdoor swimming pools, which really come into their own during the sunny summer months, many people simply prefer to come to the popular Flaucher beach area, which is located alongside the River Isar. Close to the Thalkirchner Bridge, the Flaucher is one of the city's most popular natural attractions, with locals often coming here to socialise, sunbathe, picnic, paddle, swim and enjoy the nearby beer gardens.
Open hours: daily - 24 hours
Admission: no charge

Address: Museumsinsel 1, Isarvorstadt, Munich, D-80538, Germany, DE
Tel: +49 089 2112 5180
The Forum der Technik boasts a number of science attractions for all ages. Many people will enjoy the sky simulator and star constellations within the planetarium, while others will enjoy the regular film screenings at the huge IMAX theatre.
Open hours: daily - 09:00 to 23:00
Admission: charge