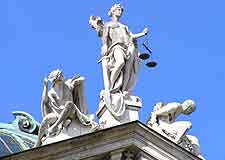 Munich's history began with the arrival of a community of Benedictine monks. Searching for fertile farming land, they settled on the site of the present-day city. Its name reflects its origins - it is derived from the medieval German word 'Munichen', which can be translated as 'monks'.

The origins of Munich as a medieval town date back to 1158, when it was founded by Henry the Lion, Duke of Saxony and Bavaria. It officially became a city in 1175.

In the early 13th century, control was given to the House of Wittelsbach. In 1255, the city became the family's official place of residence. During the Middle Ages, Munich fared well economically, mainly because of its involvement in the salt trade. This 'white gold' was transported along the salt road north of the city, from mines in Bad Reichenhall and Hallein. The city soon began to expand and an extension of its walls became necessary. In 1271, Munich was divided into two parishes - St. Peter and St. Maria.


As was the case for many German cities at this time, Munich suffered several setbacks. At the beginning of the 14th century, outbreaks of fire destroyed many buildings. Then, in 1349, the inhabitants suffered terribly as a result of plague. By 1495, when the city finally shook off the pestilence, some 12 outbreaks had ravaged its population.

In the early 16th century, Munich became the capital of Bavaria. Work began on a new official residence for Duke Albrecht V, although this wasn't to be completed until the reign of King Ludwig I. In 1632, during the Thirty Years' War, the city was occupied by Gustavus II of Sweden. When it was finally liberated, the Mariensaule, or 'Pillar of Mary', was built in gratitude. 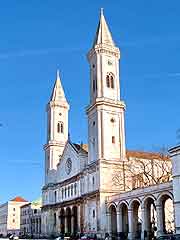 The City in Modern Times

The events of the early 19th century were to shape Munich's modern history. In 1806, Napoleon made it part of his Empire. Then, in 1810, the first Oktoberfest was held. The festival began as a celebration of the wedding of Crown Prince Ludwig and Princess Therese of Saxony-Hildburghausen. Horse races were staged throughout the day.

The town expanded well beyond its original boundaries. Monument-building in the city reached new heights, with some rather splendid examples of architecture springing up throughout the city. In 1826, a university was founded. Such large-scale projects didn't come cheaply, however, and by the time King Ludwig II came to the throne in 1864, both the government and royal house were bankrupt. Bavaria also became something of a cultural and artistic centre at this time, playing a major role in the German painting scene.

The 20th century brought turbulent times to Munich. After World War One, there was much political unrest in the city. This led to the proclamation of a Munich Raterepublic, a Bavarian Soviet Republic that was to be put down in May 1919. Shortly afterwards, National Socialism was founded here, rising to pre-eminence in the inter-war years. In November 1923, Hitler attempted to overthrow the Weimar Republic. He instigated an unsuccessful revolt in the city known as the 'Beer Hall Putsch'. In 1933, when the National Socialists took power, Munich became the 'Capital of the Movement'.

The city was to witness the final attempts to avert war in 1938. In September of that year, the Munich Pact was signed in the city's Führerbau. In the following year, Hitler suppressed a separatist plot here. The city suffered heavy bombing during the war and it is estimated that as much as 70 percent was destroyed. After the war, a massive rebuilding programme began and a more modern city slowly emerged from the rubble. Fortunately, a great deal of care went into preserving buildings of historic interest. 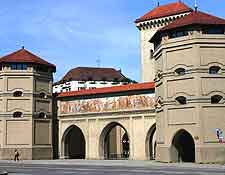 The Olympics History and Modern-Day Tourism

In 1972, Munich hosted the Olympic Games and a stadium was built, together with an underground rail system. It was to be a celebration of a new Germany. Sadly, however, it ended in tragedy when a terrorist incident led to the death of a number of Israeli athletes.

Today, Munich has a reputation for being a wealthy city, with an exceptionally high number of millionaire residents. It still celebrates the Oktoberfest, which has grown to become one of the largest festivals in the world.