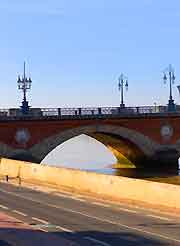 Bordeaux has been occupied for many thousands of years, with its earliest history dating back to prehistoric times. From 300 BC, there is also evidence that a Celtic settlement known as Burdigala was established here.

During Roman times, Bordeaux became an important trading centre for lead and tin. Indeed, in time, it was to become the capital of the Roman province of Aquitaine. Then, in the 3rd century AD, this bustling settlement was plundered by the Vandals of Eastern Germany. In the centuries that followed, the city came under repeated attack, not just by the Vandals, but also by other barbarian invaders, including the Visigoths and Franks.

From English to French Rule

With the marriage of Eleanor of Aquitaine to Count Henri Plantagenet (soon to be King Henry II) in the mid-12th century, Bordeaux came under English rule. During the 'English era' of history, the city earned itself a reputation as a producer and exporter of wine. Throughout this period, Bordeaux prospered. A cathedral was built here and during the latter part of the 14th century, Edward the Black Prince established the city as his capital.


In the end, however, English control of Bordeaux gradually dwindled. After the Hundred Years War, it fell back under French rule. In 1462, the city regained its sovereignty and Louis XIV established a parliament here. However, the city wasn't to regain its importance until the 16th and 17th centuries. In 1653, the city was annexed to the Kingdom of France under Louis XIV. 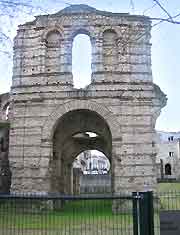 During the 18th-century, life in Bordeaux settled down and the city experienced something of a 'golden age'. Indeed, it was used as a model for the modernisation of Paris under Emperor Napoleon III. Baron Haussmann was, at that time, the Prefect of Bordeaux. The city's wine trade also found new markets all over the world, including the West Indies.

As was the case for many French cities during the latter years of the 18th century, Bordeaux was badly affected by the French Revolution and the years of 'Terror' that followed. It wasn't until the 19th century that it began to revive as a centre for commerce and industry. The 1855 Classification of wine was a landmark for Bordeaux's wines, helping to consolidate the city's reputation.

In 1870, during the war against Prussia, Bordeaux briefly became capital of the French Government. The relocation of the French government was to happen again during World War One and World War Two, in anticipation of the German invasion of Paris. In 1947, Jacques Chaban-Delmas, a radical socialist MP, became the city's mayor. He held onto this post for many years and in 1995, he was finally succeeded by Alain Juppe.

Today, Bordeaux is the fifth-largest city in France. It remains an important cultural centre and in recent years, has worked hard to restore many of its historic buildings and landmarks. Bordeaux is still a vital hub in the French wine-growing world.