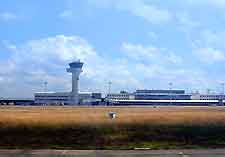 The Bordeaux Merignac Airport, France's sixth-busiest, is officially named after the Merignac suburb bordering this airport to the west of the city. Each year, more than four million passengers enter the two sections of the Bordeaux Merignac's single, L-shaped terminal.

This airport began its life as a joint military and civilian airbase in 1917, with the facility still playing a role as a French Army base today. Each day, flights depart to Paris on an hourly basis, while the Bordeaux Merignac Airport also provides daily direct flights to many other major French and European cities.

A covered walkway links the domestic and international sections of the terminal, named Hall B and Hall A respectively. All departing passengers leave the airport from its upper level, while all arriving passengers enter on the lower level.

The A630 ring road runs alongside the eastern edge of the Bordeaux Merignac Airport. This hub can be easily reached from the ring road's Junction 11B or Junction 11A. Visitors wishing to rent vehicles must be at least 25 years old, pay by credit card and have a driving licence that is a minimum of a year old. Driving in the Aquitaine region is fairly straightforward, although city centre traffic can get congested. Of note, the cheapest parking places in the city are located next to the tram stations, near the River Garonne's east banks.

Visitors should avoid riding on Bordeaux buses during peak morning and afternoon rush hours, when buses are overcrowded and traffic jams are at their worst. Passengers need only wave their hands to drivers to board the electric buses, which are the only motorised vehicles allowed to drive on the city's many pedestrian-only streets. You must inform the driver when they wish to disembark. JetBus shuttles travel between the Bordeaux Merignac Airport, the Gare St. Jean railway station and the city centre every 45 minutes, or thereabouts.

The Gare de Bordeaux St. Jean, the city's main railway station, is just a short taxi, bus or car ride away from the airport. SNCF and TGV trains depart for cities across France, and no fewer than 16 trains make the three-hour, high-speed rail journey between Bordeaux and Paris each day.

Passengers can board taxis 24 hours-a-day from outside of the terminal, or alternatively you may like to splurge on Bordeaux Limousine's comfortable chauffeur-driven service.