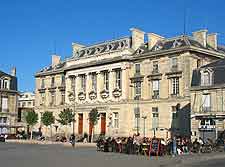 Situated on the banks of the River Garonne, Bordeaux is France's fifth largest city. Bordeaux's fortunes are currently on the rise. The city is throwing off its old sedate and sleepy image and becoming a much more vibrant place to visit, with many appealing districts and charming neighbourhoods.

An elegant historical centre, lively shopping districts, and newly revived riverside area make Bordeaux an attractive tourist destination all year round. Getting around the various neighbourhoods is simple, thanks to the city's new modern transport system and easy accessibility on foot. The main districts and locations are explained below.

This elegant 18th-century historic neighbourhood of Bordeaux boasts grand mansions, narrow streets and an abundance of small restaurants. Particularly attractive are the fine buildings surrounding the Place du Parlement. Originally the site of the city's original Gallo-Roman port, St. Pierre is a reminder that before becoming a city, Bordeaux was actually a flourishing port. 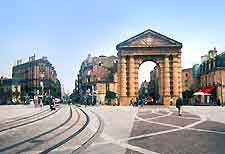 Centred around the Place de la Victoire, this is a good location to get your bearings in Bordeaux. The square leads to the Rue St. Catherine, with its multitude of shops, and is popular with Bordeaux's thousands of students and young visitors.

The neighbourhood around the basilica of St. Michel was once the religious heart of Bordeaux. Today, there is plenty to see and do in this attractive district of Bordeaux, with regular open-air markets, ancient religious buildings, and a host of cosmopolitan cafes and restaurants. 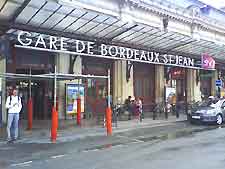 With the city's main railway station at its centre, this district of the city is geared up to cater for the thousands of tourists and visitors that pass through each day. With numerous hotels, shops, bars and restaurants, the busy neighbourhood of St. Jean stays open long after other parts of Bordeaux have closed for the night.

Located on the banks of Bordeaux's River Garonne, the district of Chartrons used to be bustling with wine merchants and sailors. Today, as trade has moved away from the river, Chartrons has become a quiet residential neighbourhood, perhaps better known for its many antique shops.

Known by many as the 'Golden Triangle', this district of Bordeaux is the place to shop if you're looking for something a little special. Many high-class stores are located here. As well as the central square, the Place des Grands Hommes, the neighbourhood also boasts many fine 18th-century buildings, the Allées de Tourny and the 19th-century Church of Notre Dame.