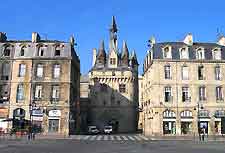 Bordeaux is an important historical city, and can boast a number of interesting and unusual historic and religious monuments. Many of these local landmarks date back to the 15th century and feature period architecture at its best.

In particular, landmarks such as the Pont St. Pierre and the Tour Pey-Berland all offer panoramic views over Bordeaux and are a great way for visitors to get their bearings. 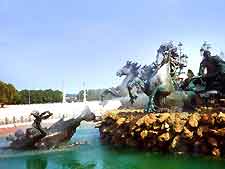 The Esplanade des Quinconces is Bordeaux's largest public square and is even reputed to be one of the largest in Europe. Overlooking the River Garonne, the square features a monument to the Girondists, as well as statues of Montaigne and Montesquieu, and two statues, which represent commerce and navigation, both hugely important influences in the city's rich past.
Open hours: daily
Admission: free

Spanning Bordeaux's River Garonne is the Pont de Pierre. This monument to 19th-century engineering stretches 486 metres / 1,568 feet and has 17 arches. The bridge can be crossed on foot and offers great views of the quay and the port area.
Open hours: daily
Admission: free

Address: Place Pey Berland, Bordeaux, 33000, France, FR
The Tour Pey Berland was built in the 15th century and is actually St. Andrés bell-tower. Highly decorated, this is undoubtedly one of Bordeaux's most notable landmarks. Head upwards to the top of the tower and visitors will be rewarded by magnificent views, as well as a close up of the 19th-century statue of Notre-Dame d'Aquitaine, which sits atop the tower.
Open hours: daily, June to September - 10:00 to 18:30; Tuesday to Sunday, October to May - 10:00 to 12:00 and 14:00 to 17:00
Admission: charge

This particularly striking monument was once the belfry of Bordeaux's former town hall. The bell, which sits atop the St. Eloi passageway into the city, is said to have played a key role in alerting the city folk of major events.
Open hours: daily
Admission: free 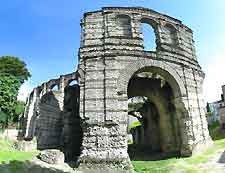 Address: Rue du Docteur Albert Barreau, Bordeaux, 33000, France, FR
The Palais Gallien is actually a well-hidden monument to Bordeaux's Roman past, when the city was known as Burdigala, and an important landmark on a map of the Roman Empire. The Palais Gallien once served as the entrance to a vast 3rd-century amphitheatre.
Open hours: daily
Admission: free