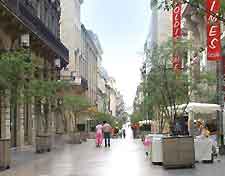 Bordeaux is close to the Atlantic Ocean, as well as being located at the heart of some of the best wine-producing estates in the world.

As such, a wealth of wine, seafood and other local fresh produce are on offer on Bordeaux's restaurant menus and provide something to really be savoured, especially when accompanied by locally produced French wine from the Aquitaine region.

Continental breakfasts of pastries and coffee are available from Bordeaux's cafes from around 8:00. Many of these cafes also serve light lunches. Fast food is available from snack stalls throughout the day.

Bordeaux is certainly not short of gourmet specialties. The city's close proximity to the Atlantic means that seafood, including fresh lobsters and Arcachon oysters, are a particular feature of Bordeaux's cuisine, being regularly available within many local restaurants. Pauillac lamb and Aquitaine beef are also popular in this region. Other culinary delights include the famous Perigord truffles, artichokes and macaroons from St. Emilion.

Of course, when dining out, no meal in Bordeaux would be complete without a bottle of wine, from the smoothness of a St. Emilion Merlot, to the ever-popular Cabernet Sauvignon.

There are plenty of bistros in Bordeaux that can offer atmosphere, good local cuisine and great views along the banks of the River Garonne. The appealing St. Pierre district also has plenty of choice when it comes to finding somewhere to eat out. Cuisine with an international flavour can be found in restaurants in the St. Rémi district of Bordeaux.

If you're in search of a light snack, then head for the southern end of the Rue St. Catherine or the Rue du Palais Gallien. Riverside stalls on the Quai des Chartrons also sell various takeaway seafood snacks. For that extra-special occasion, Bordeaux has its fair share of upmarket dining venues in the city centre. These classy restaurants offer haute cuisine in luxurious formal surroundings and are a good choice for special occasions.