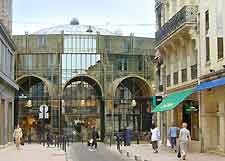 The centre of Bordeaux is relatively easy to walk around, allowing plenty of opportunity to browse in the windows of its many independent shops and larger chain stores. Bordeaux is particularly well-known for its luxury shopping and department stores, with many famous French and international brands on sale.

Like most French cities, many of Bordeaux's smaller shops and businesses close for a two-hour lunch break, staying open later into the evening. Shopping malls and supermarkets stay open all day. Le Marche des Grands Hommes opens Monday to Saturday from 10:00 to 20:00. Avoid leaving shopping until a Sunday, because most shops in Bordeaux close all day. 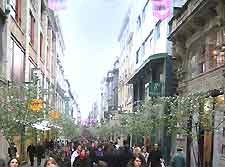 Rue St. Catherine is Bordeaux's busiest shopping street. Leading from the Place de la Comedie to the Place de la Victoire, it's over a kilometre in length and completely pedestrianised, surely qualifying it as a shoppers' paradise.

Another popular place to shop in Bordeaux is along the Cours de l'Intendance. Luxury labels vie with each other in its many designer boutiques. By way of contrast, Tati, on the corner of Rue St. James and the Cours Victor Hugo caters for those with a somewhat tighter budget.

Bordeaux's commercial centres offer a good choice of France's most popular high street labels. The city's largest shopping centre is undoubtedly Meriadeck on the Rue Claude Bonnier. At the Bordeaux branch of the French department store, Galeries Lafayette, look out for clothing, accessories and household goods. Le Marche des Grands Hommes, in the Place des Grands Hommes, is a great place to shop for anything and everything, from fresh produce to that special gift to take home, including jewellery, chocolate and fine wine. A number of speciality wine shops can be found in the area around the Tourist Information office and Grand Theâtre.

The St. Michel district of Bordeaux is a lively spot for bargains and inexpensive shopping, suiting those searching for bric-a-brac and other eclectic souvenirs. As well as a Monday market selling clothes, held just by the basilica of St. Michel, there are also two Saturday markets in the district selling collectables and antiques.