Getting Around, Blackpool Travel, Transport and Car Rental 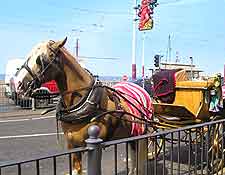 Most famous for its extremely historic seafront tramway, Blackpool contains a number of further cheap public transport options, which include buses, coaches and trains. Even horse-drawn carriages are available and travel along the Blackpool promenade, being particularly targeted at visiting holiday makers.

If you are looking to get around on Blackpool's public transport network, a one-day Travelcard is worth considering and provides unlimited travel on both buses and trams, which go as far as Fleetwood, the Flyde Coast and Lytham St. Annes.

Address: Squires Gate Lane, Blackpool, Lancashire, FY4 2QY, England, UK
Tel: +44 (0)844 482 7171
A small airport sited around 5 km / 3 miles to the south-east of the town centre, Blackpool International Airport serves more than 230,000 passengers each year and features regular flights to Belfast, Derry, London Stansted and also the Isle of Man. The main airlines include both Jet2.com and also Ryanair, both of which are known for their no-frills services and budget prices. 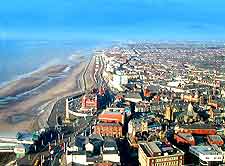 Hiring a car is an extremely convenient way to travel outside of town and many prominent cities lie close to Blackpool, such as Liverpool and Manchester, both of which are just 80 km / 50 miles away. A number of motorways and fast roads link Blackpool to the rest of England, including the M55, which passes Lytham, and the M6, linking Lancaster to the north and Pemberton to the south. Within the town itself are over 14,000 parking spaces, so you will have no problem finding a space to park your car, with popular car parks situated at Starr Gate and the Pleasure Beach.

National Express coaches offer many services both to and from Blackpool, with the coach station being located along Talbot Road, close to the heart of the town. Buses arrive here on a daily basis from London (six hours), Liverpool (one and a half hours) and Manchester (one and a half hours). Further long-distance buses are provided by Stagecoach North West and link to destinations such as Fleetwood, Flyde and also Lytham St. Annes.

Town buses are run by the Blackpool Transport Services (BTS), a local firm operating in the Blackpool and Flyde area, with clearly colour-coded routes. 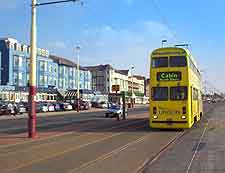 Blackpool's tram historic network is amongst the oldest on the planet and has been famous for many years. The first horse-drawn tram ran along the Promenade in September 1885, being converted to electric trams in 1899. Over the years, the tramway has been extended and now travels to Lytham St. Annes and also Fleetwood, where the main terminal is located. Blackpool trams come in all shapes and sizes, including double-decker vehicles, and are an extremely inexpensive method of public transport.

The town's main railway station is Blackpool North, which is sited along Talbot Road and just five blocks to the east of the North Pier. Regular trains travel to many nearby towns and cities, such as Bolton, Chorley, Liverpool, London, Manchester and Preston.