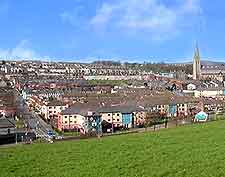 Although 'across the border' in Northern Ireland, Derry is very much an Irish city with a charming heritage of ancient buildings and interesting attractions. Derry's location on the Foyle River gives it a pleasant atmosphere, though the more modern parts of the city do dampen down its quaintness.

The city was previously known as Londonderry, by which it frequently appeared in the British press as a key location for IRA activities during the darker years of Northern Ireland's recent history. Today it is a peaceful and forward looking tourist destination, but remains out of the range of popular tourism in the Republic of Ireland.

There are no restrictions, not even a roadblock, to visitors making a detour en-route the north-west coast of Ireland, making Derry a surprisingly rewarding place to visit when on the Emerald Isle. Of note, the Derry Tourist Information Centre is located on Foyle Street, close to the Foyleside Shopping Centre, the Millennium Forum and Harbour Square. 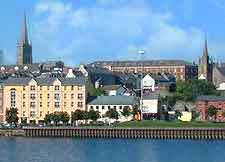 Derry is the second-largest city in Northern Ireland, after Belfast, and as such, comes with lots of places to visit and attractions to enjoy. The stunning City Walls add a huge amount of character to Derry and date back to the 17th century, being incredibly wide and strong. More modern is the increasingly popular Genealogy Centre, which regularly sees visitors coming to trace their Irish ancestry. The Fifth Province attraction is a good way to learn about the city's Celtic culture and heritage, while the Hands Across the Divide memorial remembers the tragic events of Bloody Sunday in 1972. Just outside of the city, you may like to check out the Amelia Earhart Centre and learn how this famous pilot, the first woman to fly across the Atlantic solo, actually landed here during her record-breaking expedition. More information about Derry Tourist Attractions. 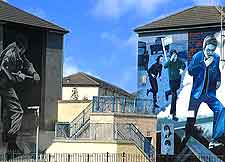 The Londonderry history is hard to escape as you tour the city and various landmarks will vie for your attention. One such structure is the Guildhall, which stands in the heart of Derry and features cathedral-like neo-gothic architecture. The adjacent Guildhall Square sees much activity and it was here that Bill Clinton addressed the crowds during his 1995 visit, when he was the US president. There are actually two real cathedrals in the city, St. Columb's and St. Eugene's, as well as various churches, with the Long Tower Church being especially noteworthy. The Bogside district also contains a number of important sites, being home to both the Bloody Sunday Memorial and the Free Derry Corner. More information about Derry Landmarks and Monuments. 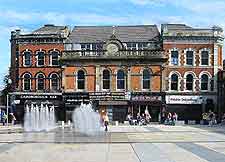 Being such a heavily visited city, a good selection of especially cultural draws has emerged over the past few decades. The Museum of Free Derry is one such magnet and also goes by the name of the National Civil Rights Archive. Others include the Tower Museum, the Harbour Museum and the Foyle Valley Railway Centre, all of which boast endless amounts of information and exhibits relating to their chosen subject. If you are interested in art, then several different possibilities present themselves. The open-air People's Gallery is rather unexpected and features 12 huge murals, which have been painted on walls close to each other, with more information about these paintings being found at the nearby Bogside Artists Studio. For something a little more usual, the McGilloway Gallery showcases contemporary Irish Art. More information about Derry Museums and Derry Art Galleries. 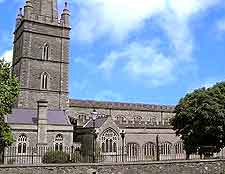 Northern Ireland's countryside really does deserve to be explored and Derry is close to some extremely popular tourist destinations and places of interest, which are just a day trip away. To the north-east is the Giant's Causeway, a World Heritage Site consisting of approximately 40,000 interlocking ancient basalt columns created following volcanic action, the tops of which appear almost as stepping stones. Many villages and towns are within easy driving distance from Derry, such as Castlerock, Coleraine, Limavady, Portrush and Portstewart. However, if you have just one day going spare, then an excursion to the capital city of Belfast would be recommended. More information about Derry Attractions Nearby. 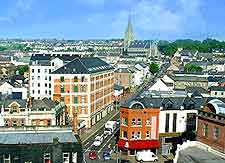 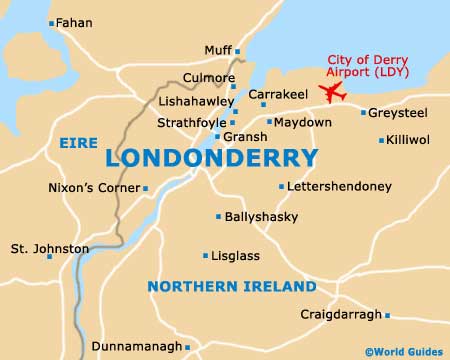