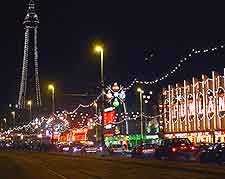 The ultimate tourist resort, there truly is something for everyone in Blackpool, with events, festivals, ballroom dancing and concerts every single week of the year. Blackpool's summer season is a particularly busy time and a number of sporting events take place at this time, including the Blackpool Marathon and Half Marathon, and also the Triathlon.

Of course, the highlight of the town's festivities comes at the very beginning of September, when the world-famous Blackpool illuminations are switched on. Stretching for more than 10 km / 6 miles, the lights have their origins at the end of the 19th century and have got bigger and more elaborate ever since. The ultimate way to view the lights is to take a tram ride along the route.