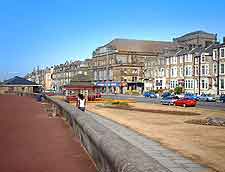 Whilst Blackpool is a highly developed tourist hotspot, plenty of nearby towns and villages also contain a number of noteworthy, lower-key attractions, including local museums, scenic bays, beaches and historic buildings. Close to Blackpool, the nearby Ribble Valley offers some of the most stunning scenery in the whole of Lancashire and is the perfect place for a walk, with much of the area being dominated by moorland around the Forest of Bowland.

Also close to Blackpool are many further attractions in the towns and villages of Churchtown, Marsh Mill, Fleetwood, Morecambe and Lancaster. 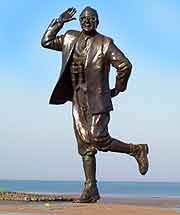 A popular excursion from Blackpool, Morecambe is currently enjoying a renewed popularity, due to its inviting coastal setting. Morecambe is a attractive coastal town sited around 64 km / 40 miles (50 minutes) to the north. More than 45,000 people currently live in the town of Morecambe, with the main attractions including its stunning bay and sandy / shingle beach. A number of prominent buildings in the town are currently undergoing much-needed renovation. One of the town's most famous landmarks is its statue of Eric Morecambe, situated next to the coastline and along the promenade.

The village of Churchtown is located approximately 27 km / 17 miles (25 minutes) to the north-east of Blackpool and is best known for its superb Botanic Gardens, which were first laid out in the 1870s. With free admission and plenty of interesting walking trails, the Botanic Gardens are a popular day trip from the town and provide the perfect respite, away from the animated Golden Mile. Within the gardens, a local museum boasts a number of natural history exhibits and a popular gift shop. 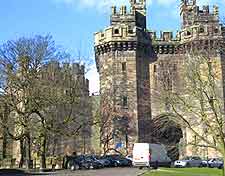 Lancaster is a prominent town sited 55 km / 34 miles (40 minutes) north of Blackpool, and is brimming with important historical attractions, many of which date back to the 18th century, when the town's port was at its busiest. Particularly old is the Lancaster Castle and Priory, a dominating structure built in the middle of the 12th century and featuring a number of alterations over the years. Further highlights in Lancaster include the City Museum on Market Square, the Judge's Lodgings townhouse off China Street, and also the Maritime Museum along George's Quay.

Address: Thornton-Cleveleys, Lancashire, England, UK
Lying to the north-east, Thornton is just 10 km / 6 miles (20 minutes) from the very centre of Blackpool and can be found in the nearby Thornton-Cleveleys area. This enticing village contains a number of appealing attractions, such as a working mill, which is now a Grade II listed building complete with its own art gallery, and an impressive shopping centre.

Fleetwood is a large town, located roughly 14 km / 9 miles (26 minutes) north of Blackpool. Amongst the main attractions in this town, the Fleetwood Museum is worthy of a look and stands along Queens Terrace, near to the town's quayside. Full of historical information about the region and its development over the years, the museum includes exhibitions about the town's fishing industry and more recent tourist appeal. The museum is open daily between April and mid-November and also features a gift shop selling a range of maritime-themed souvenirs.