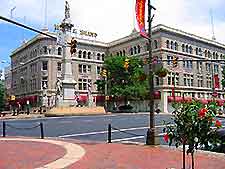 Once the state capital in 1777, Lancaster is a charming town located on the western side of the area's Amish country, in Pennsylvania (PA). Lancaster is a particularly wealthy agricultural region and Lancaster County's commercial center.

Known for its Central Market on Penn Square, which offers a range of local food and crafts, and the Heritage Center Museum of Lancaster County on West King Street, Lancaster is home to many interesting specialty stores and Amish tourist attractions, including a range of horse and carriage rides. 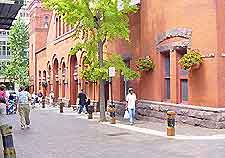 The tourism industry in Lancaster is thriving and the area encourages visitors. Lancaster's main tourist information center is the Pennsylvania Dutch Convention and Visitors Bureau off the US-30 on Greenfield Road. Open daily with extended summer hours, this tourism center does a great job of providing advice on accommodation, restaurants, orientation, travel and tourist attractions.

Accommodation in Lancaster includes a mixture of historic hotels and chain motels, often with superb countryside views. Most hotels in Lancaster are clustered around the central downtown district, near to the Central Market and Penn Square. Further hotels can be found outside of Lancaster, in nearby towns, including Millersville, Wyomissing and Harrisburg. More information about Lancaster Hotels.

Lancaster contains many tourist attractions, including Amish Farm and House - with tours of this fascinating house and farmyard; Lancaster's Hershey Park - offering many rollercoaster rides and water slides; James Buchanan's Wheatland - featuring the magnificent mansion and gardens of Pennsylvania's only president; and Lancaster's Zoo America - with over 200 animals, educational information and many impressive attractions. More information about Lancaster Tourist Attractions.

Some of Lancaster's best museums include the Heritage Center Museum of Lancaster County - containing a large collection of historic 18th-century paintings and period furnishings; the Hands-on House Children's Museum - a must for children with an array of interactive exhibits; and Lancaster's North Museum of Natural History and Science - providing a wealth of information about this planet and space, and including lots of interactive exhibits. More information about Lancaster Museums.