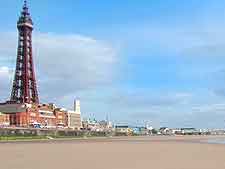 Blackpool history shows that this glitzy resort actually takes its name from the peat-coloured water of a brook known as 'Le Pull'. The whole Fylde area used to be covered in peat bogs and marshy forests, making it almost impossible for travellers to cross it safely.

The town was first mentioned in an early 17th-century church register. It referred to the inhabitants of a placed called Black Pool. From the Middle Ages to the 1700s, little changed in Blackpool. It was still nothing more than a sparsely populated seaside village.

Blackpool's evolution into a popular seaside resort really began in the 18th century. This was a time when it had become fashionable to take holidays by the sea, which was widely regarded as having health-giving properties. Even then, though, visitors didn't come here in any great number.


Then, in 1781, a road was built that allowed visitors to travel from Manchester to Blackpool by stagecoach. It wasn't a particularly comfortable journey, but it did open up this seaside town to people from the nearby mill towns of Lancashire. Later on, coaches came from even further afield, although it was still an arduous journey. When visitors arrived, there was little in the way of entertainment, just a short grass-covered promenade, a bowling green and a theatre. 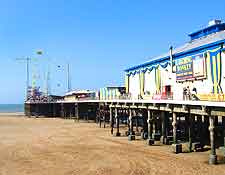 From Victorian Times to Present-Day History

It was the advent of the railway that was to categorically change the town's fortunes. In 1846, the railway line arrived in town. Talbot Road Station (now called Blackpool North Station) was built and holiday makers started to arrive in their thousands. The busiest periods were the 'Wakes Weeks'. These were set periods of time in the year when mills and factories were closed for the servicing of machinery. Many of the workers took full advantage of their enforced time off and headed straight to Blackpool.

A whole plethora of facilities and attractions were added. In 1863, the North Pier was opened to the public, followed shortly after by the Central Pier and Victoria Pier (later renamed South Pier). An amusement park was also built and eventually became known as the present-day Pleasure Beach. In 1878, the Winter Gardens were opened, at last providing indoor entertainment during inclement weather.

By the end of the 19th century, the town could boast a tramway, opera house, Blackpool Tower, Grand Theatre and Town Hall. It even had electric lighting. In 1912, visitors were amazed by the first showing of Blackpool's famous illuminations. Whilst the annual illuminations were stopped during the First World War, they were restarted in 1925 and are still a popular attraction to this day.

The rapid increase in visitors likewise brought about the rise of new entertainment. Tourism in Blackpool was given a further boost by the post-war Labour Government's introduction of paid annual holidays. Now, there were even more opportunities to head to Blackpool.

By 1960, Blackpool still enjoyed its position as one of Britain's biggest holiday destinations, particularly for the working classes. However, after the growth of the package holiday and cheaper air tickets, tourist numbers started to drop. In more recent years, the town has been forced to rethink its role. In 1972, the Blackpool Zoo opened. More recent additions include a new shopping centre, water complex and sea life centre.