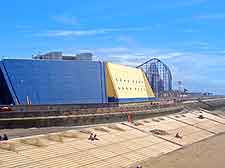 The town of Blackpool is dominated by its seafront and Golden Mile, along which you will find endless arcades and amusements, alongside the Irish Sea. Blackpool's sandy beaches have been a major draw card for tourists all over England for many years, with donkey rides and the big wheel on the main pier being amongst the highlights. The Blackpool Beach itself is filled with many thousands of people during the summer months, but since the sand stretches for around 11 km / 7 miles, there are always plenty of spaces. Within the town itself, many local districts, neighbourhoods and communities have evolved over the years.

Those looking for quieter beaches in the Blackpool area should consider Cleveleys Beach, which lies around 6 km / 4 miles to the north and offers a more rugged feel, being mainly made up of pebbles. This beach offers particularly impressive views, with the South Lakes usually being clearly visible. Also nearby is the more southerly St. Annes Beach, a sandy and extremely wide stretch, close to the Blackpool promenade and sited in the Lytham St. Annes area. St. Annes beach is known for its sand dunes and also for hosting numerous kite-flying events every year. Here are Blackpool's main districts, neighbourhoods and locations. 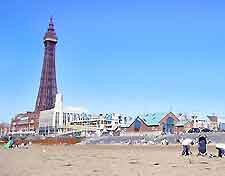 The very town centre lies just a short distance from the coastline, beach sandwiched between the beachfront and Stanley Park. Many of Blackpool's locals work in this part of the town, where many shops are concentrated. The town centre contains many popular attractions, such as the Centre Pier, Blackpool Tower, and the Waxworks Museum. 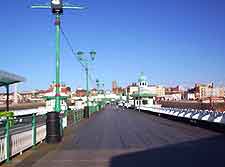 Prominent suburbs located on the southern side of the town centre include Common Edge, Halfway House, Marton and Mereside. Further south is Blackpool International Airport, which is located on the south-easterly side of town and dates back around 100 years. North of Blackpool town centre are the Bispham, Little Bispham, Norcross, Poulton and Warbreck areas, while Singleton lies to the north-east.