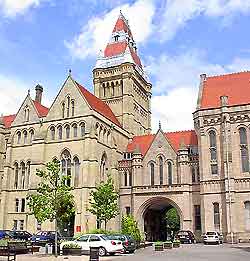 The University of Manchester is located around 1 mile / 1.6 km to the south of the city centre and is one of the country's most unique educational institutions. With two excellent museums, superb facilities and a remarkable academic pedigree, Manchester University is a top-class seat of learning.

Closely linked to Manchester's history as the first industrial city in the world, the university dates back around 200 years, when the Manchester Mechanics Institute was formed.

The university also combines the city's Victoria University, which was founded in 1851, with its origins in Owens College on Quay Street. The college moved to its present site on Oxford Road in 1873 and has continued to expand ever since. Although these two important complexes worked together for more than a century, they have recently combined to become one single institution, the renowned University of Manchester.


Over the years, Manchester University has evolved to include many different faculties and departments, such as those of Commerce and Theology, which were added in 1903, together with the departments of Arts, Science, Law, Medicine and Music. In 1914, the Faculty of Education arrived and in 1965, the Business School and the Faculty of Business Administration became part of the spreading campus. More recently, the impressive School of Biological Sciences was added in 1986 and the general facilities continue to improve and expand every year.

With an enormous list of impressive graduates, including no less than 23 Nobel Prize winners, industry leaders and famous scientists, Manchester University has developed a reputation for academic excellence and prestige.

The university is within walking distance of the city centre and has good connections to its transport network. The campus can be reached as follows"