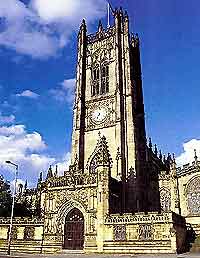 Manchester is fairly limited when it comes to religious beliefs, with roughly 60 percent being Christian, just under 20 percent being non-believers, and the remaining number including both Muslim and Jewish communities. There are more than 30 churches and chapels spread around Manchester, together with four synagogues.

The city's magnificent Grade-I listed cathedral serves as the seat of the Bishop of Manchester and is officially known as the Cathedral and Collegiate Church of St. Mary, St. Denys and St. George. Building work commenced in 1421 and after many additions and extensions, was finally considered complete in 1882. However, the appearance was remodelled during the Victorian era and suffered severe bombing damage during the WWII Blitz of 1940, and again in 1996 at the hands of the IRA. Today the cathedral is fully restored and boasts Perpendicular Gothic architecture with many splendid stained-glass windows, both old and new.

Address: Victoria Street, Manchester, M3 1SX, England
Tel: +44 (0)161 833 2220
The stunning medieval Manchester Cathedral stands proudly in the heart of the city centre, being found just across from the Triangle Shopping Centre and just a stroll away from Harvey Nichols. With parts of the cathedral dating back to the 15th century, highlights include breathtaking architecture, numerous large stained-glass windows, stone carvings, a vast interior and a bookshop.
Open hours: daily
Admission: free 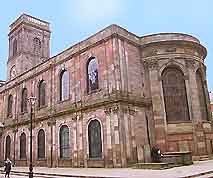 Address: The Parish Church of St. Ann, St. Ann Street, Manchester, M2 7LF, England
Tel: +44 (0)161 834 0239
Centrally located St. Ann's Church dates back to the early 18th century. It is widely believed that Christopher Wren, architect of the world-famous St. Paul's Cathedral in London, was heavily involved with the planning of this church. St. Ann's is a popular venue for many seasonal events in this area.
Open hours: Monday to Saturday - 09:30 to 16:45, Sunday - 09:30 to 12:30
Admission: free

Address: Mulberry Street, Manchester, M2 6LN, England
Tel: +44 (0)161 834 3547
Located in the Albert Square area, St. Mary's Church was founded at the end of the 18th century and is most famous for appearing in sketches by Lawrence Stephen Lowry. Other highlights include a collection of contemporary religious paintings and a large artwork entitled 'The Stations of the Cross'.
Open hours: Monday to Friday - 08:00 to 17:00, Sunday - 08:00 to 14:00
Admission: free

Address: 16-20 Turner Street, Northern Quarter, Manchester, M4 1DZ, England
Tel: +44 (0)161 834 9232
The Buddhist Centre resides within the Northern Quarter, being established in 1997 and moving to its present location in 1996. Visitors can expect to find excellent facilities, meditation classes, yoga lessons at the Bodywise Natural Health Centre, and refreshments at the onsite Earth Cafe.
Open hours: Monday to Thursday - 11:00 to 19:00, Friday and Saturday - 11:00 to 17:00
Admission: free