Greater Manchester offers lots of places to visit and attractions to enjoy, with most being easy to reach from the city when treated as day trips.

A historic and rather beautiful estate based on the northern side of Knutsford, Tatton Park is a little under 14 miles / 23 km to the south-west of central Manchester, where it comes with a vast deer park spread over some 1,000 acres / 400 hectares.

Situated to the south-east of the city and on the far side of the Peak District National Park, just past Bakewell, Chatsworth House offers another appealing excursion and is a stunning 16th-century manor house with a large collection of paintings and sculptures, as well as some spectacular gardens. Alternative attractions include the street fairs at the Last Drop Village, the canal cruises and waterfront pathways at Wigan Pier, the ancient ruins of Beeston Castle, the medieval manor house of Turton Tower and the 18th-century Palladian mansion of Tabley House.

Address: Tatton Hall, Knutsford, Cheshire, WA16 6QN, England
Tel: +44 (0)1565 654822
Now a National Trust attraction, administered in conjunction with Cheshire East Council, Tatton Hall dates from the early part of the 18th century, while the 15th-century Old Hall is still standing on the estate as well, being converted into cottages. Located on the southern side of the hall and entered via the stable yard, the gardens are quite breathtaking and incorporate both Italian and Japanese gardens, along with formal terraces and statues.
Open hours: daily - 10:00 to 19:00 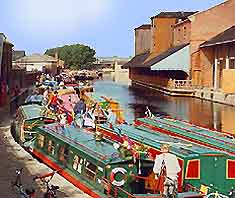 Address: Trencherfield Mill, Wigan, Lancashire, WN3 4EF, England
Tel: +44 (0)1942 323666
Wigan Pier is a major tourist attraction and this rather misleading name actually means the area surrounding the Leeds and Liverpool Canal, beneath the flight of locks. The old pier was likely to have been a small wooden jetty, where frequent wagons came to unload coal onto the barges. This area has recently enjoyed much redevelopment, seeing the arrival of a series of small themed shops and a performance centre. Boat trips along the canal are another draw card when the sun is shining.
Open hours: Monday to Thursday - 10:00 to 17:00, Saturday and Sunday - 11:00 to 17:00

Address: Hospital Road, Bromley Cross, Bolton, BL7 9PZ, England
Tel: +44 (0)1204 591131
Lying on the northern side of Bromley Cross is a collection of historic farmhouses and related buildings, which have become known as the Last Drop Village. Dating back to the 18th century and restored in the sixties, these buildings now house a popular pub (the Drop Inn), a number of arts and craft shops, a conference and events centre, a restaurant and a tearoom.
Open hours: daily - 24 hours

Address: Siddington, Macclesfield, Cheshire, SK11 9JY, England
Tel: +44 (0)1625 861221
This notable Cheshire country house was built between the years of 1719 and 1732 and is a Grade-II listed building, residing within more than 100 acres / 40 hectares of parkland. With Tudor-revival style architecture and landscaped grounds, Capesthorne Hall comes with paintings, antiques, historic furniture and period features galore. During the summer months, various events are staged here, including a vintage car show and an unusual fireworks competition.
Open hours: Wednesday and Sunday - 12:00 to 17:30

Address: Chatsworth Hall, Bakewell, Derbyshire, DE45 1PP, England
Tel: +44 (0)1246 582204
This stately home stands right next to the River Derwent and enjoys an attractive backdrop provided by a wooded hillside. Whilst Chatsworth House itself is filled with valuable old masters, sculptures and period attractions, it is the garden that draws the interest, particularly the 17th-century stepped waterfall named 'The Cascade', the Seahorse Fountain, the Canal Pond and the Elizabethan Garden, where Mary, Queen of Scots was once allowed to stroll whilst being held prisoner here in the late 16th century.
Open hours: daily - 11:00 to 17:00

Address: Chester Road, Acton, Nantwich, Cheshire, CW5 8LD, England
Tel: +44 (0)1270 625245
Built in the early 17th century, Dorfold Hall can be found around an hour south of Manchester and is home to a spectacular interior, with ornate ceilings and antique furniture. This grade-I listed Jacobean mansion is part of a vast estate made up of farmland and areas of woodland, as well as chunks of historic parkland and spreading landscaped gardens. Each year, the Nantwich and South Cheshire Show is a particular highlight and is usually held here at the end of July.
Open hours: Tuesday - 14:00 to 17:00

Address: Church Lane, Gawsworth, Macclesfield, Cheshire, SK11 9RN, England
Tel: +44 (0)1260 223456
Lying next to Macclesfield and to the south of Manchester, Gawsworth Hall is an impressive 15th-century hall where many open-air theatrical productions are performed during the summer months. This attractive timber-framed house was built on the site of an earlier Norman structure and it is believed that it was originally centred around a courtyard, although some sections have been demolished over the years, leaving it U-shaped.
Open hours: daily - 14:00 to 17:00

Address: Little Moreton, Congleton, Cheshire, CW12 4SD, England
Tel: +44 (0)1260 272018
Close to Congleton, Little Moreton Hall is some 50 minutes to the south of Manchester, being an attractive, timber-framed manor house, surrounded by a moat. Now a National Trust property, notable attractions here include guided tours, an open-air theatre and various seasonal events. Of interest, although the black and white facade seems to be characteristically Tudor in its appearance, it is not original and was actually added in the 19th century.
Open hours: daily - 11:30 to 17:00

Address: Congleton Road, Nether Alderley, Macclesfield, Cheshire, SK10 4TW, England
Tel: +44 (0)1625 523012
Nether Alderley Mill is a lovingly restored 15th-century watermill in full working order, located close to South Manchester. The mill has been owned by the National Trust since 1950, when a lengthy period of renovation work was undertaken. Giant Victorian waterwheels, regular demonstrations of corn grinding and attractive surroundings are amongst the main draws.
Open hours: Tuesday to Sunday - 13:00 to 17:00

Address: Tudor Road, Manor Park, Runcorn, Cheshire, WA7 1SX, England
Tel: +44 (0)1928 569895
Norton Priory lies to the west of Manchester, just past Warrington, and dates back to the 12th century. Operating as an ancient tourist attraction since the 1970s, the remains of these monastic buildings include a museum, various sculptures, landscaped gardens and picnic areas. The museum houses many interesting models and artefacts, while the Walled Gardens are a real highlight, being restored in the 1980s and featuring an orchard, seasonal vegetables and summer flowers. Close by, look out for the ice house, which is entered via a dark tunnel.
Open hours: Monday to Friday - 12:00 to 17:00, Saturday and Sunday - 12:00 to 18:00

Address: Tabley, Near Knutsford, Cheshire, WA16 0HB, England
Tel: +44 (0)1565 750151
Tabley House dates back to the 18th century and is an impressive Palladian mansion that can be found roughly 30 minutes to the south, being close to Knutsford. With large expanses of parkland and gardens, this former stately home is now used as a nursing home for the elderly, although the reception rooms and tea shop are regularly opened to members of the public.
Open hours: Thursday to Sunday - 11:00 to 18:00

Address: Chapeltown Road, Turton, Bolton, BL7 0HG, England
Tel: +44 (0)1204 852203
An attractive medieval manor house some 30 minutes to the north-west of Manchester, Turton Tower stands just past Bolton and is now listed as a scheduled ancient monument. Constructed towards the end of the Middle Ages, the manor house remains in a good state of repair, with the oldest part dating from the beginning of the 15th century. Various alterations have been made over the centuries, although the Tudor character is still very much present, both inside and out. Visitors will find antique furniture, a stone tower, an open-air theatre and pleasant gardens.
Open hours: Monday to Thursday - 10:00 to 12:00, Saturday and Sunday - 11:00 to 17:00

Address: Bowes Gate Road, Bunbury, Tarporley, Cheshire, CW6 9PP, England
Tel: +44 (0)1829 261422
At just under an hour to the south-east of Manchester, the Bunbury Watermill is a wonderful working mill with origins dating back to the 13th century, although today's structure dates from the middle of the 19th century. Steeped in history, this is actually one of the oldest mills in the country and it has been completely restored.

Address: Station Road, Marple, Stockport, SK6 6AL, England
Tel: +44 (0)161 427 1079
Dating back more than 200 years and residing a little under 30 minutes to the south-east, the historic Marple Lock Flight links the Lower and Upper Peak Forest canals, and comprises some 16 individual canal locks. With nearby walking trails and picturesque views, this is an impressive piece of early 19th-century engineering, quickly and effectively raising the level of the canal by more than 60 metres / 197 feet.

Address: Beeston, Tarporley, Cheshire, CW6 9TX, England
Tel: +44 (0)1829 260464
Located roughly 39 miles / 63 km to the south-west of Manchester, Beeston Castle is a major tourist attraction in the Tarporley area and offers stunning panoramic views of the surrounding Cheshire Plain. This ancient fortress began its life in the early 13th century and soon after became the property of King Henry III, who used it for military purposes. Now in a state of ruins following the English Civil War in the mid-17th century, the castle resides atop a tall rocky summit and is owned by English Heritage. A visitors centre, small museum and gift shop complete the main attractions of today.
Open hours: daily - 10:00 to 18:00

Address: Holcombe Hill, Ramsbottom, Bury, BL0 9FE, England
Tel: +44 (0)161 253 5111
Celebrating the life of Sir Robert Peel, who founded the modern-day police force, Peel Tower is a tall monument, surrounded by scenic countryside and located roughly 30 minutes to the north. The tower stands on Holcombe Hill, where it was erected in 1852 and measures in at just under 40 metres / 131 feet. A restored staircase leads to the very top, where some glorious panoramas await.