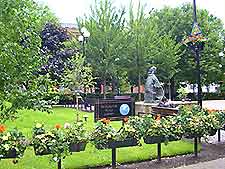 The sprawling metropolitan county of Greater Manchester comes with more than a handful of green expanses, pretty gardens and public parks, providing recreational spaces for families, joggers and dog-walkers. Platt Fields Park stands in the Fallowfield district of the city, lying to the south and alongside Manchester University, where it is more than 100 years old and covers almost 100 acres / 40 hectares.

Many further sizeable parks are just a short drive away from Manchester city, being located in nearby suburbs, towns and cities, such as Bolton, Cheshire, Chorlton, Failsworth, Farnworth, Prestwich, Stalybridge, Stockport and Wigan. Many tourists head to the neighbouring suburb of Didsbury, where the Fletcher Moss Botanical Garden lies approximately 15 minutes to the south of the city centre. A little further away and to the south-east, the Peak District National Park covers a vast area exceeding 550 square miles / 1,425 square kilometres and is visited by in excess of ten million people every year.

Address: Cheshire / Greater Manchester / Staffordshire / South Yorkshire / West Yorkshire, England
Tel: +44 (0)1629 816200
Many visitors to Manchester choose to enjoy a day trip to the Peak District National Park, a small proportion of which is owned by the National Trust (the estates of High Peak, Longshaw and South Peak). Buxton makes for a good entry point, with its train station enjoying direct connections to the city. Entry into the National Park itself is completely free, although some attractions charge an admission fee, and the majority of the car parks will also charge a fee for parking. Worth looking out for is the charming riverside town of Bakewell, the show caves at Castleton and Matlock Bath, the manor house named Haddon Hall, and Lyme Park, which was used as a location in the BBC's 1995 adaptation of Pride and Prejudice, famously starring Colin Firth as Mr. Darcy. If you are arriving with walking or cycling in mind, then consider Manifold Valley, the Roaches, Stanage Edge and the Tissington Trails.
Open hours: daily

Address: Millgate Lane, Didsbury, M20 2SW, England
Tel: +44 (0)161 434 1877
Located in the Didsbury area and to the south of Manchester, the splendid Fletcher Moss Botanical Garden features a large collection of plants from all over the world, together with landscaped grounds, a café, tennis courts and picnic areas. Created in 1919 and spread over roughly 10 acres / 4 hectares, the garden is sited part-way between Stenner Woods and the River Mersey. Onsite are rockeries, waterfalls, boggy areas with giant gunneras, ornamental trees and an Old Parsonage. Of interest, it was here (at the Croft house) where the Royal Society for the Protection of Birds (RSPB) was founded in 1889, being first named the 'Plumage League'.
Open hours: daily

Address: Mabfield Road, Fallowfield, Manchester, M14 6LP, England
Tel: +44 (0)161 224 2902
With large open expanses of grassland, Platt Fields has grown up around a sizeable pleasure lake, where angling and boating have become popular pastimes. Points of interest include a Shakespearean garden with historic themed planting, a labyrinth, picnic spots, a pavilion, two playgrounds, bowling greens and sports courts where you can play a game of basketball, soccer or tennis. There are also a number of large outdoor events staged here during the summer months.
Open hours: daily

Address: John Howarth Countryside Centre, Stannybrook Road, Failsworth, M35 9WJ, England
Tel: +44 (0)161 308 3909
Situated to the north-east of central Manchester and next to Ashton under Lyme, the Daisy Nook Country Park sits within the Medlock Valley, being based around Millhouses (Clayton Bridge), Waterhouses and Woodhouses. Highlights include woodland trails, boat trips, a café and mature trees, as well as some extremely friendly geese living on Crime Lake, waiting to be fed.
Open hours: Wednesday to Friday - 13:00 to 16:00, Saturday and Sunday - 10:30 to 17:00

Address: Mottram Road, Stalybridge, SK14 8BL, England
Tel: +44 (0)1270 610180
Nature lovers should certainly earmark a visit to the Eastwood RSPB Reserve in Stalybridge, where wild birds (more than 40 species recorded each year), animals and native plants are in abundance. There are roughly 1,000 mature trees, with species including beech, horse chestnut, oak and sycamore, while there are just two conifers - a single yew tree and pine. The reserve is around 10 acres / 4 hectares in size and also contains ponds and a stream, where kingfishers have been known to fish.
Open hours: daily

Address: Buxton Road West, Disley, Stockport, SK12 2NX, England
Tel: +44 (0)1633 766492
Lyme Park lies to the far south-east and just past Stockport, and features herds of deer, woodland walks, landscaped areas and a café. This is a vast estate covering more than 1,000 acres / 400 hectares and is owned and managed by the National Trust, although Stockport Metropolitan Borough Council do contribute financially. The house and restaurant is open between March and October, while the park itself remains open all through the year, along with the plant centre and gift shop.
Open hours: daily - 08:00 to dusk

Address: Brookburn Road, Chorlton, M21, England
Tel: +44 (0)161 905 1100
The Chorlton Nature Reserve, in the Chorlton-cum-Hardy area, is a beautiful green oasis filled with natural woodland, ponds and a number of scenic pathways suitable for walking, jogging and cycling. This is the perfect place for and afternoon stroll along the riverside and even though the M60 motorway is close by, the mature trees, singing birds and natural sounds soon transport you far away and into the countryside.
Open hours: daily

Address: Over Peover, Knutsford, Cheshire, WA16 9HM, England
Tel: +44 (0)1565 632358
Located to the south, Peover Hall is more than 400 years old and this Grade-II listed Elizabethan country house is full of history, standing next to a quaint old church. With formal topiary, a walled garden, landscaped grounds, guided tours of the house (at 14:30 and 15:30) and a popular tearoom, there is plenty to occupy visitors arriving on a sunny day.
Open hours: Monday and Thursday - 14:00 to 17:00

Address: George Street, Compstall, Stockport, SK6 5JD, England
Tel: +44 (0)161 427 6937
Etherow Country Park is an important wildlife haven close to Stockport and to the far south-east of Manchester city. Home to a large number of wild birds and plants, Etherow was established in the late 1960s and based around a historic cotton mill. Other features include a large lake, sailing, angling, a café and picnic areas.
Open hours: Monday, Tuesday, Saturday and Sunday - 10:30 to 16:00, Wednesday - 13:00 to 16:00

Address: Waterfold Car Park, Bradshaw Road, Bradshaw, Bolton, BL2 6EJ, England
Tel: +44 (0)1204 853360
Jumbles Country Park is to be found to the north-west and has many attractions for visitors. These include a well-stocked lake for fishing and sailing, woodland trails and picnic areas. Refreshments are available at the Tea Garden Cafe, which has become known for its scrumptious homemade cakes and tasty bacon sandwiches. The farmyard animals, friendly reindeer, pets corner, pony rides and tractor rides all combine to add further interest, suiting families in particular.
Open hours: daily

Address: Rock Hall Visitor Centre, Hall Lane, Farnworth, BL4 3DN, England
Tel: +44 (0)1204 334343
Situated roughly 20 minutes to the north-west and just outside of Bolton, the Moses Gate Country Park is based in Farnworth and is within easy reach of Manchester. When it comes to outdoor sports, the possibilities here are plentiful and include horse riding, cycling, canoeing, jogging and walking. Moses Gate was officially established in 1975 and covers approximately 750 acres / 305 hectares. The park was once called home by one of Lancashire's most historic paper mills, which was located where the visitor centre now stands.
Open hours: Tuesday to Friday - 09:30 to 16:30, Saturday to Monday - 13:00 to 16:30

Address: Park Lane, Prestwich, England
Tel: +44 (0)161 796 6404
Prestwich Forest Park resides within the Bury region and is a peaceful spot covering some 495 acres / 200 hectares, with an attractive river running through the centre. Featuring wide pathways suitable for walking, jogging, cycling and horse riding, the area is also rich in wildlife, with sizeable chunks of natural woodland. Children will be pleased to find a playground and visitors centre.
Open hours: daily

Address: Hartley Street, Millbrook, Stalybridge, SK5 3DR, England
Tel: +44 (0)161 338 8200
Stalybridge Country Park lies to the far east of the city, being centred around two main areas. The Brushes Valley comes with four large reservoirs connecting the Pennine Moors, while the Carrbrook section is presided over by the ruins of medieval Buckton Castle. Visitors can expect walking trails, mature trees, and views across Jodrell Bank and the Cheshire Plain. On a fine day it is even possible to see Snowdonia.
Open hours: daily

Address: Tandle Hill Road, Royton, Oldham, Manchester, OL2 5UX, England
Tel: +44 (0)161 627 2608
Located some 25 minutes to the north-east of Manchester and next to Royton, Tandle Hill Country Park is a vast parkland with large areas of beech woodland. Featuring scenic views, woodland walks, open grassland, a small golf course, a visitors' centre, a café, a playground and picnic facilities, Tandle Hill was formally established in the early 1970s and covers some 110 acres / 45 hectares. Sited on the highest point within the grounds is a monument to those from Royton who lost their lives during World War I.
Open hours: daily

Address: Lower Higham Visitor Centre, Higham Lane, Hyde, Manchester, SK14 5LR, England
Tel: +44 (0)161 368 6667
Werneth Low Country Park lies alongside the easterly town of Hyde, being just past Denton and covering an area of around 200 acres / 80 hectares. With woodlands, walking trails and a large amount of wildlife, Werneth Low boasts some superb views of the Pennine Hills and even the distant Welsh mountains. The Lower Higham Visitor Centre displays various interesting exhibitions of archaeology and is housed within a 17th-century building, which once functioned as the Lower Higham Estate's farmhouse.
Open hours: Tuesday - 11:45 to 16:00, Saturday and Sunday - 12:30 to 16:30

Address: Over Alderley, Macclesfield, Cheshire, SK10 4QB, England
Tel: +44 (0)1743 708100
Hare Hill Park lies some 16 miles / 26 km to the south of Manchester and resides on the outskirts of Macclesfield, next to Prestbury, where it is owned and managed by the National Trust. With large areas of natural woodland, a Victorian-style walled garden and wild flowers, there are also a number of interesting pathways. The Hare Sculpture Trail is a particular highlight, as are the seasonal displays of rhododendrons. After you visit, you may like to walk to Alderley Edge, which is roughly an hour away by foot.
Open hours: daily - 10:00 to 17:30