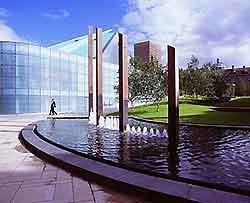 Home to one of the world's most famous gay villages, the city of Manchester is certainly open-minded and soon realised that the numerous themed bars and clubs dotted around Canal Street were an integral part of the city's modern, forward-thinking character.

Manchester's famous Canal Street sits within the Rochdale area of the city and is located between Princess and Sackville Streets, at the very heart of the Gay Village district. Canal Street is a fully pedestrianised stretch and lies on the eastern banks of the Rochdale Canal. During the warmer seasons, the street is regularly bustling with crowds of visitors, day and night, and exudes a distinctive and exciting party vibe.

Although the earlier openly gay bars began to arrive in the early years of the 1970s, the opening of the rather chic Manto bar (Manchester Tomorrow) is 1991 was a catalyst to Canal Street becoming the gay heart of Manchester. Local property developers soon took notice of the area, redeveloping and reinventing many of the old tired properties.


Today, visitors to this part of the city will find a large concentration of friendly bars, restaurants and nightclubs that party long into the night and the morning's early hours. It is this area of Manchester that featured heavily on Channel 4's television gay soap 'Queer as Folk', followed by ITV's Bob and Rose, both of which were penned by Russell T. Davies.

However, following this publicity, Canal Street regularly sees an influx of hen parties, which in turn draw large numbers of straight men, and so the bars are rather losing their identity a little. As a direct result of this, many gay and lesbian locals are now choosing to socialise and party elsewhere, favouring the bars along the vibrant Peter Street, in Manchester's Northern Quarter, or those at the Deansgate Locks, where celebrities can often be seen hanging out.

The highlight of the gay and lesbian year in the city is without question the Manchester Gay Pride Festival, which takes place each year in late August. With large parades, carnivals and parties in plentiful supply, the pride festival is always a hugely popular event and reliably attracts more than 150,000 gay men and lesbian women, lasting for almost two weeks.

Manchester Pride ranks amongst the longest-running of all England's gay pride events and tends to be centred around Canal Street. Wrist bands (pre-paid) are provided upon entry where required within the 'gated zone', although many of the events are completely free of charge, such as the colourful procession itself and the candlelight AIDS vigil at the Whitworth Gardens. Held over the August bank holiday weekend, the Big Weekend is a major part of the festivities.