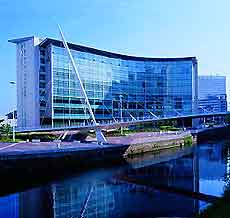 Manchester is one of the most important business cities in the United Kingdom and is home to a large number of corporate head offices, important financial companies, banks and large office blocks. The upper King Street area in the heart of Manchester's financial district and many of Manchester's most majestic buildings can be found on the upper King Street, including a number that are now listed buildings. Manchester is famous for being a city of firsts, including many industries, music, culture and fashion, and Manchester often leads the way in the finance world.

With many spectacular buildings and architectural showpieces, including the Grade II listed Corn Exchange, the splendid Manchester Town Hall, many stylish, modern office blocks and Manchester's new £150 million, 47 storey, glass tower - the highest living space in the United Kingdom, Manchester architecture continues to lead the way. During the birth of the Industrial Revolution, Manchester's thriving cotton industry brought enormous wealth to the city of Manchester, resulting in many mills, canals, warehouses and businesses. Much of this area in Manchester has been restored and redeveloped, and is considered to be of great national importance. 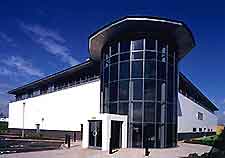 Some of the main businesses in Manchester are now tourism, retail and hospitality. Manchester is a busy city, with excellent conference facilities, one of the best shopping centres in the United Kingdom, world-class restaurants, a vast university complex, a major British airport and a superb choice of accommodation. It is therefore no surprise that tourists flock to Manchester throughout the year, and Manchester's tourism business continues to thrive.

Manchester has certainly grown as an important financial city in England and in the suburbs of Manchester are a number of large businesses, including software companies, engineers, law firms, publishers and other large companies. The pace of business life in Manchester tends to very varied throughout Manchester, depending upon the type of business and industry involved, although many Manchester companies are fairly relaxed.

In both dress and manners, locals in Manchester are generally formal and normal business courtesies should still be observed. The degree of formality necessary depends upon the actual nature of the business, with computer companies and media organizations being far more informal than many financial businesses in Manchester. Many men still wear suits and short sleeve shirts are quite acceptable in the summer months in Manchester.

Business hours in Manchester city tend to run from Monday to Friday, between 09:00 to 17:30, although many offices in Manchester do close later. Manchester's shops are open longer and often throughout the weekends, and some supermarkets are open 24 hours. Banks in Manchester generally open from 09:00 to 17:00 and larger branches may also open on Saturday mornings.

Working lunches are a popular way to do business in England and Manchester is no exception. Many locals in Manchester are quick to use first-name terms when appropriate and although some exclusive restaurants in Manchester do have a strict dress code, most are more informal and a relaxed dress code is acceptable.

A brief and friendly handshake is usually the customary greeting in Manchester and generally throughout England. New acquaintances are often addressed on first name terms in Manchester.

A large number restaurants in Manchester have a strict 'no smoking' policy, although some do tend to cater for smokers in different areas. Most Manchester companies and offices are now 'non-smoking' and although the British have neither a positive nor a negative attitude to smoking, it is best to only smoke when in the company of like-minded people in Manchester.