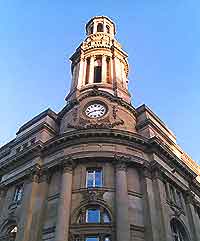 Manchester is a city with a lengthy and interesting history, gaining its town charter in 1301 and its city status in 1853. Many of its most attractive landmarks date back to the Victoria era, such as the magnificent Town Hall and the Manchester International Conference Centre, which began its life as the city's main railway station.

Further city landmarks of significance include the Central Library, the Free Trade Hall, Wythenshawe Hall and the John Rylands Library. If you are prepared to travel slightly outside of the city boundaries, then you may like to plan a visit to nearby Bramhall Hall at Stockport, Heaton Hall in Prestwich, and Dunham Massey Hall at Altrincham, the latter of which is a popular National Trust property.

Address: Albert Square, Manchester, M60 2LA, England
Tel: +44 (0)161 234 5000
The Grade-I listed Town Hall stands in the city centre, adjacent to Albert Square, and is one of the grandest Victorian landmarks in the whole city. Built in the 1870s, highlights include Gothic-style architecture with tremendous attention to detail, a courtyard, an immense staircase, a large collection of paintings and an enormous clock tower, which stands high over the surrounding cityscape. Guided tours are available on request and many important meetings regularly take place here.
Open hours: daily 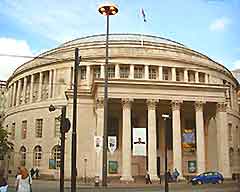 Address: St. Peter's Square, Manchester, M2 5PD, England
Tel: +44 (0)161 234 1900
Built in the 1930s and recently enjoying a period of extensive renovation costing in excess of £150 million, Manchester Central Library is one of the most instantly recognisable structures in the city centre and its circular architecture is impressive from both the outside and the inside - particularly its round reading room. With literally thousands of books, archives and important local documents, the library also has a busy café and a basement theatre.
Open hours: Monday to Thursday - 10:00 to 20:00, Friday and Saturday - 10:00 to 17:00

Address: Peter Street, Manchester, M2 3NQ, England
Tel: +44 (0)161 834 3697
The Free Trade Hall is one of the most instantly recognisable landmarks in the city and was built in the middle of the 19th century. With stylish Italian palazzo themed architecture, this building has been home to many classical and pop concerts over the years and is situated in the city centre, between the International Convention Centre and the Central Library. Today, the hall functions as a popular Radisson Hotel and displays many of its most important artefacts.
Open hours: daily

Address: Windmill Street, Manchester, M2 3GX, England
Tel: +44 (0)161 834 2700
Featuring stylish architecture and historic Victorian features, the centrally located Manchester International Conference Centre was formerly named the G-Mex Centre and is an important building. This huge complex dates from 1880, being completely modernised and renovated in both the 1980s and between 2008 and 2009, and is now a premier events venue.

Each year many sizeable exhibitions, concerts, theatrical events, business functions and displays take place here. A number famous pop and rock groups have performed at the MICC in recent years, including U2, Snow Patrol and Hard-Fi, while the centre also played host to gymnastics events during the Commonwealth Games of 2002.
Open hours: daily

Address: 6 Mount Street, Manchester, M2 5NS, England
Tel: +44 (0)161 834 5797
The centrally located Quakers Religious Society of Friends Meeting House is both a striking structure and a place of worship. Built in 1828 by Richard Lane, this building features neo-classical architecture and a Greek-style facade with supporting pillars, and is now called home by a number of small local companies.
Open hours: daily - 09:00 to 22:00

Address: Bramhall Park Road, Bramhall, Stockport, SK7 3NX, England
Tel: +44 (0)161 485 3708
Residing in the nearby town of Stockport and roughly 10 miles / 16 km to the south of the city, Bramhall Hall is a classical Tudor manor house with origins in the 14th century. Featuring a traditional black and white timber-framed exterior, large parklands, a woodland area and an open-air theatre, Bramhall Hal is now owned by the Stockport Metropolitan Borough Council and is home to many seasonal open-air concerts and theatrical performances.
Open hours: Monday to Saturday - 13:00 to 17:00, Sunday - 11:00 to 17:00

Address: Charcoal Lane, Altrincham, WA14 4SJ, England
Tel: +44 (0)161 941 1025
Owned by the National Trust and dating back to the early part of the 17th century, Dunham Massey Hall is located in nearby Altrincham, to the south-west of Manchester. With splendid 18th-century architecture, numerous Grade-II listed buildings, castle ruins, landscaped gardens and a deer park, the hall also comes with a restaurant, a gift shop and a number of seasonal events, which take place throughout the year.
Open hours: daily - 12:00 to 17:00, free to members of the National Trust

Address: Middleton Road, Heaton Park, Prestwich, M25 2SW, England
Tel: +44 (0)161 773 1231
Heaton Hall was built in the late-18th century and is an important historic site in nearby Prestwich. Surrounded by vast gardens and parkland, other attractions include an impressive collection of paintings, antique furniture, many period features inside the house, a pets corner for children, seasonal exhibitions and walking trails.
Open hours: Wednesday to Sunday - 10:00 to 17:30

Address: 150 Deansgate, Manchester, M3 3EH, England
Tel: +44 (0)161 834 5343
Founded in the late-19th century, the John Rylands Library can be found in the Deangate area, in the heart of the city centre. With striking Gothic architecture and many impressive historic features, the library is a wonderful landmark and point of reference, and is arguably the city's most beautiful building. Inside is a large collection of early-printed books and important archives.
Open hours: Monday to Friday - 10:00 to 17:30, Saturday - 10:00 to 13:00