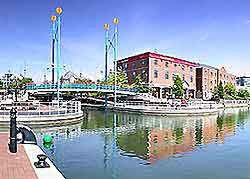 The majority of the hotels in central Manchester target the business traveller during the week, when lodging rates are at their most expensive in the heart of the city, around Albert Square and St. Peter's Square. Accommodation generally becomes slightly cheaper at the weekend, in an attempt to encourage tourists, and enticing weekend packages and cheap deals are often available.

Those arriving in Manchester without first reserving a hotel room should consider heading to the city's Tourist Information Centre, where a handy accommodation booking service is available for a small charge. It is worth bearing in mind that availability at hotels in the city can vary greatly between August and May (the football season), particularly if Manchester United are playing a home game.


For budget accommodation in Manchester, the YHA youth hostel on Potato Wharf is amongst the best option and is located within the Chesterfield area, where it is conveniently close to the Museum of Science and Industry. Nearby and at the opposite end of the lodging scale is the four-star Hilton Manchester Hotel on Deansgate, which is actually part of the imposing Beetham Tower.

Other familiar accommodation brands in Manchester include the Radisson Edwardian (Free Trade Hall) on Peter Street, and the Express by Holiday Inn and Copthorne hotels, both of which reside on the Salford Quays. Also of note is the Days Hotel on Sackville Street, which is just a minute from the Piccadilly Station. Those planning to visit the G-MEX Exhibition Centre often choose to stay at the adjacent Jurys Inn Manchester Hotel on Great Bridgewater Street.

For the ultimate in luxury accommodation, the Rocco Forte Lowry Hotel is hard to beat and stands in Dearmans Place, in the recently redeveloped Chapel Wharf district, next to the River Irwell. For something a little cheaper, the B&Bs lining the centrally located Liverpool Road provide particularly good value, while the outlying suburb of Didsbury is also of note, with Victorian guest houses being based around Palatine Road and Wilmslow Road, near to many local pubs.