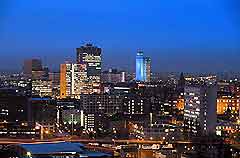 Throughout the year, Manchester is a city of culture, with many annual festivals being staged to celebrate its rich heritage and multi-ethnicity. Things to do each year are particularly seasonal and include springtime soccer matches, one of Europe's biggest St. Patrick's Day parades in March, and the Great Manchester Run each May.

The Chinatown district is known for its character and size, and at the end of the winter, notable celebrations take place here as part of the annual Chinese New Year celebrations.

Other festivities of note include the nine-day Manchester Jazz Festival each July, the colourful gay pride parties and parades in August, and the Manchester Literature Festival in October. At the cathedral, the International Religious Poetry Competition is a further highlight, as is the Proms in the Park, which is often staged at Heaton Park and draws more than 10,000 people. At the Central Convention Complex (formerly the GMEX Center), the National Wedding Show may appeal to those with bridal aspirations.

Address: Sir Matt Busby Way, Old Trafford, Manchester, M16 0RA, England
Tel: +44 (0)161 872 1661
Held at the world-famous Old Trafford football stadium, the Manchester United Football Club play many home matches during the football season. Tickets should always be booked in advance, as United is currently one of the most popular football teams in the UK.

Address: Various venues across the city, Manchester, M1, England
Tel: +44 (0)161 234 3999
Held during mid-March, the Irish Festival is a showcase of Irish culture in the city, with numerous events, parades, concerts and street entertainers.

Held in the city centre, the Festival Europa features live music, quality entertainment, specialist markets and performance arts. Europa is held from May to June.

The Great Manchester Run is a popular sporting event that takes place at the end of May each year. Covering 10 km / 6 miles, the run takes in many of the city's most striking landmarks and tourist attractions.

Address: 226 Ducie House, Manchester, M1, England
Tel: +44 (0)0161 228 0662
The city's well-supported Jazz Festival is a hugely successful jazz extravaganza that takes place in the Castlefield area of the city centre at the end of July.

The Royal Horticultural Flower Show is held every year in Tatton Park at the end of July and is England's largest flower show outside of Chelsea.

Elite British athletes compete at the city's impressive 6,000-seater athletics arena during the summer and this is a major sporting event in Manchester.

Dancing in the Streets

Dancing in the Streets is a celebration of dance, with performances and showcases from both international and local artists.

Held in the Salford area, the Salford Triathlon ITU World Cup Event attracts large crowds of spectators as top athletes are put through their paces.

Manchester Pride has become one of the largest gay events in the United Kingdom and is held at the end of August. Attracting in excess of 150,000 gay men and lesbians, the pride festivities last in the region of ten days and comprise carnival parades and extravagant celebrations.

Proms in the Park

Held in central Manchester, Proms in the Park is the city's very own 'Last Night of the Proms' concert with live performances from top classical musicians, in mid-September.

Address: Beehive Mill, Jersey Street, Ancoats, Manchester, M4 6JG, England
Tel: +44 (0)161 236 5555
A two-week celebration of literature staged each year in the middle of October, including a number of related events, such as the Midland Future Young People's Writing Competition. Activities, workshops, discussions and readings take place at a variety of venues around the city, including the city's Art Gallery on Mosley Street, the Imperial War Museum North at the Quays, the Instituto Cervantes on Deansgate, the Martin Harris Centre for Music and Drama on Bridgeford Street, the Royal Exchange Theatre on St. Ann's Square, the Royal Northern College of Music on Oxford Road, the Town Hall on Lloyd Street, the City Library at Elliot House and the Yard Theatre on Old Birley Street.

The city's exciting Christmas Lights Switch-On takes place at the end of November and celebrates the arrival of the festive season, with live entertainment and breathtaking fireworks.

Address: Albert Square, Town Hall, Manchester, M60 2LA, England
Tel: +44 (0)161 234 5000
The Dazzle Jewellery Fair is a major event and is generally held during the months of November and December. With spectacular modern jewellery, classical designs and stylish craft work, the fair travels around several major cities in the United Kingdom, attracting many celebrities and famous people.

During the months of November and December, the city squares are transformed into a winter wonderland, with twinkling wooden chalets, packed with continental items and excellent Christmas gift ideas.