Getting Around, Bruges Travel, Transport and Car Rental 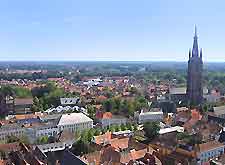 Central Bruges is steeped in history and was never designed with public transport in mind. The best way to travel around the very heart of Bruges is often simply by foot, allowing you to fully soak up the atmosphere of day-to-day life and appreciate the architecture close up, although cyclists are becoming an increasingly common sight in the city centre, with two-way traffic often restricted to just bikes.

The only method of public transport available within the city itself is buses, while taxis are also on hand and tend to congregate around the market place. Many visitors also travel to and from Bruges via its busy port, with daily ferries sailing to destinations such as Zeebrugge. 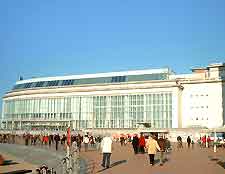 Address: Nieuwpoortsesteenweg 889, 8400 Ostende, Belgium
Tel: +32 59 55 12 11
The closest airport to the city is the Ostend- Bruges International Airport, which is located around 20 km / 12 miles from the city centre. However, transport connectivity at the airport is fairly limited and consists mainly of buses, which travel to the Ostend train station, amongst other destinations. Brussels Zaventem Airport is also reasonably close by and can be reached in around an hour, by either car or train. The main airlines operating at this facility include Brussels Airlines, EasyJet, Jet Airways, Jetairfly, Lufthansa, Thomas Cook and also Vueling Airlines. 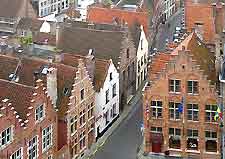 The medieval centre of Bruges is filled with waterways and cobbled streets, being far from ideal for driving around. Parking spaces can be hard to come by in central Bruges and finding your way around the streets is often difficult, although several multi-storey car parks are just minutes away from the very city centre, with the most largest and cheapest being situated next to the railway station. Further car parks are to be found at 't Pandreitje and also at t' Zand, although many people simply prefer to leave the car on the city's periphery and either walk in or use public transport. Bruges is well connected to the rest of Belgium by busy roads and motorways, such as the A10, E34, E403 and the N31. There is much talk about making the heart of medieval Bruges fully pedestrianised and completely free from traffic, although this scheme has yet to the implemented.

There is an extensive network of buses spread across the city of Bruges and these are run by the Belgian transport company of De Lijn. Local buses connect all of the main suburbs, along with nearby cities, towns and villages, such as Charleroi, Damme, Ghent, Ostend and Zeebrugge. From the middle of July to September, long-distance Euroline buses travel to and from London, collecting passengers from the railway station. 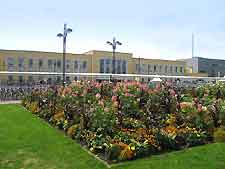 The city's train station is located around 1.5 km / 1 mile to the south of Bruges city centre, with the information desk being open daily between the hours of 07:00 to 20:30. Trains travel every 30 minutes from Bruges to Brussels(one hour) and also Ghent (20 minutes). Other Belgian cities connected by train transport include Antwerp (one hour and ten minutes), De Panne (one hour, via Lichtervelde), Knokke (15 minutes), Kortrijk (40 minutes), Ostend (15 minutes) and also Zeebrugge (ten minutes). Eurostar trains also run through the city.