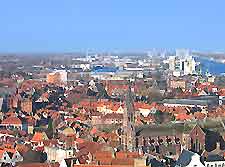 Remaining almost unchanged by the ravishes of time, the port city of Bruges (Brugge) has become a leading Belgian tourist attraction in its own right and is amongst the very best preserved of Europe's medieval cities. Now classed as a 'European City of Culture', central Bruges contains two rather beautiful main squares, the Grote Markt and also the Burg, where the tourist information office is situated.

Each year, well over two million visitors arrive in Bruges to marvel at the tourist attractions, of which there are many. However, in the very height of the summer tourism season, the influx of tourists can make Bruges feel a little crowded, although a large proportion are often day trippers and are long gone by the late afternoon. At this time you can enjoy a far more peaceful stroll around the relatively compact centre and enjoy the sprinkling of sights, encompassed by the city's rather scenic oval-shaped moat. 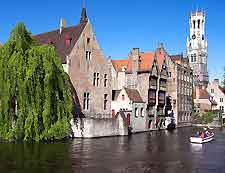 Begin your sightseeing of Bruges around the central Grote Markt (Grand Place), which is surrounded by a series of gabled guildhalls and is also home to the iconic tower, which goes by the name of Belfry of Bruges (Belfort) and dates back to the 13th century. The other main public square in Bruges is the Burg, and this is where tourists will find the Basilica of the Holy Blood. Hard to miss is the city's Sint Salvator Cathedral and also the beautiful Gothic-style Stadhuis (Town Hall), which is Belgium's most historic and arguable most attractive town hall, being adorned with statues of various counts and countess from Flanders. More information about Bruges Tourist Attractions and Landmarks.

With information about the city's famous medieval diamond industry, the Diamond Museum (Diamantmuseum) offers daily diamond polishing demonstrations and boasts many valuable diamond exhibits. The Gruuthusemuseum is also worth investigating and contains a number of beautiful silk tapestries and Belgian antiquities, while for art lovers in Bruges, the Memling Museum is the place to visit and works by Germany's celebrated artist Hans Memling enjoy an attractive setting, being housed within a former hospital chapel. More information about Bruges Museums and Art Galleries. 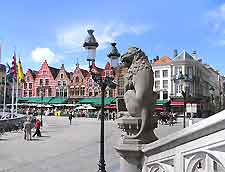 Belgium's capital of Brussels is just over an hour away from Bruges and more than warrants an excursion, where many of the best sights are based around its central market square, the Grote Markt. Also within easy reach of Bruges are leisurely boat trips along the River Scheldt in Antwerp, the magnificent St. Baafskathedraal cathedral and 14th-century Belfort tower in Ghent, the iconic Montagne de Beuren staircase and its 373 steps in Liege, and the coastal attractions within Ostend, the 'City on the Sea'. More information about Bruges Attractions Nearby.