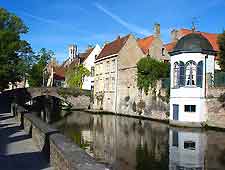 Home to a huge number of museums, which cover many different topics and aspects of Belgian history, the city of Bruges also contains some good art galleries. In fact, you could easily spend a week or two doing nothing but touring the main museums in Bruges.

Some to look out for in particular include the Arentshuis, the Groeninge, the Gruuthuse and also the Memling. Each of these Bruges museums can be accessed by using the city's handy 'discount ticket'. Worth noting, the majority of the main museums in Bruges are open daily between April and September, and often close on Tuesdays and at lunchtimes during the winter months. 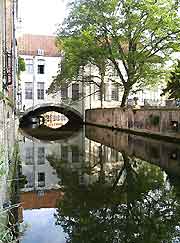 Address: Dijver 17, Bruges, Belgium, BE
Occupying 22 different rooms within a large and imposing 15th-century residence adjoining the Bruges Cathedral (Sint Salvator), the Gruuthusemuseum celebrates decorative and applied arts. The main exhibits are sadly only labelled in Flemish and include everything from Belgian antique furniture and silk tapestries, to sculptures and other art works. Interestingly, the Gruuthusemuseum is named after the rather special combination of herbs and flowers used to brew traditional Belgian beer, which is known locally as 'gruut'. One of the more unusual exhibits can be found in the second room and is a wall hanging clearly showing a medieval method for removing haemorrhoids, while in Room 21 visitors are treated to views across the city and canal.
Open hours: April to September, daily - 09:30 to 17:00; October to March, Wednesday to Monday - 09:30 to 12:30 and 14:00 to 17:00
Admission: charge

Address: Dijver 12, Bruges, Belgium, BE
The Groeningemuseum is home the one of the best collections of art in Belgium and also goes by the name of the Bruges Museum of Fine Arts. With paintings dating back as far as the 14th century and right up to the present day, the Groeningemuseum has become known for its extensive collection of Flemish primitives, with many treasures by famous Belgian artists. The museum itself is not overly large and features gallery spaces spread around just under 20 different rooms, laid out in a sensible, chronological order.
Open hours: April to September, daily - 09:30 to 17:00; October to March, Wednesday to Monday - 09:30 to 12:30 and 14:00 to 17:00
Admission: charge

Address: Mariastraat 38, Bruges, Belgium, BE
Although the Memlingmuseum may be relatively small, its attractions are big and include six true masterpieces, created by acclaimed German artist, Hans Memling (1430 - 1494). The Memling Museum itself is housed within the chapel of the 12th-century Hospital of St. John (St. Janshospitaal) and home to Memling's famous St. Ursula Shrine, which is constructed with painted and guilded woodwork. Next door is the Apotheek, a 17th-century pharmacy which was once part of this medieval hospital.
Open hours: April to September, daily - 09:30 to 17:00; October to March, Wednesday to Monday - 09:30 to 12:30 and 14:00 to 17:00
Admission: charge

Address: Dijver 16, Bruges, Belgium, BE
The Arentshuis is housed within a magnificent 18th-century residence and stands next to the banks of the river. Once owned by the affluent local Arents family, the museum comprises two separate exhibitions, art works and lace. The lower floor is where you will find the Lace Museum (Kantmuseum), where a variety of lace from both Belgium and all around the world is displayed, including bobbin and needlepoint. Head upstairs to the Brangwyn Museum and you will be treated to some rather powerful etchings and moody paintings created by local Bruges artist, Frank Brangwyn (1867 - 1956), who become well known for his industrial landscapes. Both of these attractions feature identical opening hours.
Open hours: April to September, daily - 09:30 to 17:00; October to March, Wednesday to Monday - 09:30 to 12:30 and 14:00 to 17:00
Admission: charge

Address: Katelijnestraat 43, Bruges, Belgium, BE
Tel: +32 05 034 2056
Housed within a stylish and modern building, and celebrating Bruges' long-running association with diamonds, the Diamantmuseum explains the history of the city's medieval diamond industry, when it was one of the world's very first diamond polishing centres. Highlights at the Diamantmuseum include two of the smallest diamond sculptures in existence, which can only be appreciated with the aid of a magnifying glass. Look out for the daily demonstrations of diamond polishing, which are always interesting and usually draw a good crowd of interested onlookers.
Open hours: daily - 10:30 to 17:30
Admission: charge, combined tickets available for both the museum and polishing