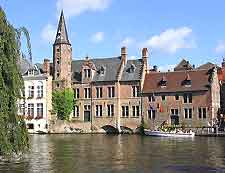 A good place to start any sightseeing in Bruges is around the Grote Markt, a large and spacious public square surrounded by tourist attractions and some of the city's most striking landmarks and medieval monuments, such as the Belfry (Belfort) and many gabled guildhalls. The Markt is often crowded with tourists and pedestrians, and you will regularly see it being crossed by horse-drawn carriages.

The city's historical centre is filled with cobblestone streets and is now listed as a World Heritage Site by UNESCO. Here you will find one of Bruges' most loved tourist attractions, the Sint Salvator Cathedral, which dates back almost 1,000 years, although it has changed greatly over the years. Attractions in Bruges with a difference include hiring a bike and cycling around the city, sightseeing onboard one of the various multilingual boat trips along the canals, sitting back and enjoying a Belgian beer at the spacious Grote Markt, or climbing the Belfort clock tower and enjoying the great views from the very top. 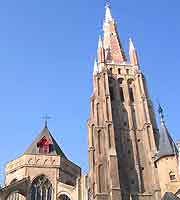 There are countless tourist attractions and historical landmarks worth searching out in Bruges and the Church of Our Lady should feature prominently at the top of everyone's list. The church itself is known to date from as long ago as the 13th century, although many additional elements have been added over the following centuries. The brick-built spire towers some 122 metres / 400 feet, which makes it the tallest structure in the whole city. Within the Church of Our Lady, look out for the beautiful sculpture of the Madonna and Child, which was created from white marble at the beginning of the 16th century, by none other that Italian artist Michelangelo.
Open hours: daily
Admission: charge 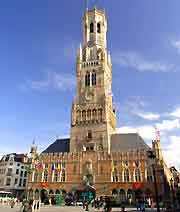 Built during the 13th century and today one of the most famous of all the landmarks in Bruges, the Belfort now features on the World Heritage List and stands just over 80 metres / 262 feet high. The views from the top of this clock / bell tower are quite breathtaking, although many will find that climbing the 366 steps to the very top is quite a challenge and somewhat exhausting. Those who choose to climb the tower will find it more than worth the effort, passing numerous attractions along the way, such as the barred treasury and the 18th-century carillon and its 47 bells, which are still played regularly by the Belfort's employed bell ringer.
Open hours: daily - 09:30 to 17:00
Admission: charge, discounts for children and seniors 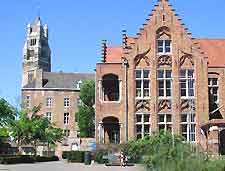 Address: Dijver, Bruges, Belgium, BE
The Sint Salvator Cathedral is better known to tourists as simply the Cathedral of Bruges and is known to date from the 12th century, although it has origins as far back as the 10th century. During the 1840s, the tower was somewhat altered following fire damage. It was at this stage that the cathedral's tower was made considerably taller than that of the Church of Our Lady to raise the status of the building, and soon after, the church gained its cathedral status. Sint Salvator Cathedral has always been an important attraction and contains many historic paintings and wall carpets.
Open hours: daily
Admission: charge

Address: Burg Square, Bruges, Belgium, BE
Situated on the far south-western corner of Bruges and named after the relic of Jesus Christ's blood, which is believed to have arrived here during the 12th century, the Basilica of the Holy Blood is worth searching out. The church itself contains many attractions and these are grouped in two distinct areas, the Romanesque lower chapel, and the rather more elaborately decorated upper chapel. The relic of the 'Holy Blood' is still revered by those who come here and on Ascension Day, this ancient artefact is paraded through the city's streets during the 'Holy Blood Procession' (Heilig-Bloedprocessie).
Open hours: April to October, daily - 09:30 to 12:00 and 14:00 to 18:00; November to March - Thursday to Tuesday - 10:00 to 12:00 and 14:00 to 16:00, Wednesday - 10:00 to 12:00
Admission: free 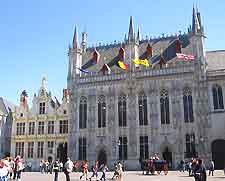 The oldest town hall in the whole of Belgium, the Bruges Stadhuis is arguably amongst the most beautiful. Construction of the Stadhuis commenced in 1376 and it was not until more than 40 years later that it was finally completed. This prominent local landmark boasts a Gothic stone exterior, decorated with many statues of noblemen from around Flanders. Step inside and you will find a number of rooms where members of the public are permitted. The main attractions within the Stadhuis is the Gothic Hall (Gotische Zaal), which is located on the first floor, filled with medieval magnificence and still used today for numerous functions. The adjacent exhibition room also contains some very interesting and old Belgian maps.
Open hours: daily - 09:00 to 12:30 and 13:15 to 17:00
Admission: charge 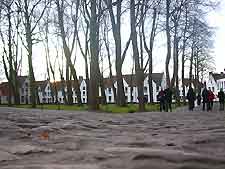 The Béguinage is an interesting and important group of small buildings, which were once used by the Beguines, a historic Roman Catholic community of women from the 13th century. A central courtyard is surrounded by a series of these historic dwellings and separated from the modern city of today by an old wall. The residents of the Béguinage greatly opposed violence and war, and attracted large numbers of women who joined their cause and beliefs, often bringing them considerable wealth at the same time.
Open hours: daily - 24 hours
Admission: free