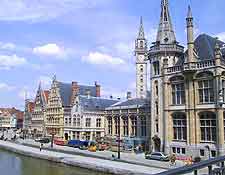 In medieval times, Ghent (Gent) was actually Europe's second-biggest city after Paris and although today it is somewhat overshadowed by Belgium's nearby capital of Brussels, it is still a huge tourist magnet and stands at the confluence of the Scheldt and Leie rivers. Today, Ghent is the proud capital of Belgium's Oost-Vlaandered and although the city is considerably larger than nearby Bruges, it is perhaps not quite as full of character or picturesque.

Nevertheless, Ghent still has plenty of tourism appeal and its numerous university students add a definite youth quality, being well catered for by the city's nightlife. Ghent does not feature a single central square, but instead has grown around a number of open spaces and historic churches. Technically, the Korenmarkt is actual the heart of Ghent, while close by off of the Belforstraat, the Botermarkt is where the tourist information office resides, beneath the Belfry. 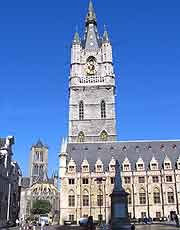 A walking tour of Ghent is a good way to get your initial bearings and see many of the main sights. Tourists will not be able to miss the imposing facade of the Cathedral of St. Bavo (Sint Baafskathedraal), which is where you will find the famous altarpiece painting, the 'Adoration of the Mystic Lamb'.

Close by is Ghent's glorious 13th-century Church of St. Nicholas (Sint Niklaaskerk), the Gravensteen Castle, and the Belfort (Belfry), a tall tower where those prepared to tackle the steep staircase to the top will find the views more than worth the effort. More information about Ghent Tourist Attractions and Landmarks. 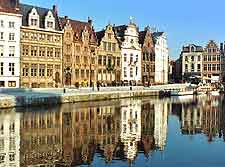 There is a huge amount of culture within Ghent and this is reflected within its extensive selection of museums. Located in the Citadelpark, the Stedelijk Museum voor Actuele Kunst (SMAK) is amongst the very best and is a leading contemporary art gallery, while Ghent Museum of Fine Arts is equally impressive and contains a number of important Flemish Primitives. With information about folklore and some very family friendly features, the Folklore (Volkskunde) Museum is home to a number of thoroughly renovated almshouses and reconstructions of period workshops. More information about Ghent Museums and Art Galleries. 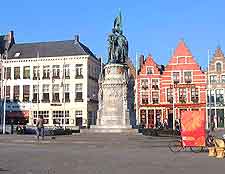 The Flanders region of Belgium is chock full of quality tourist attractions, all of which are easily within reach of Ghent and well worth exploring. Brussels in extremely close to Bruges and as the capital, rightly contains many of Belgium's most noteworthy sights, such as the Grand Place (Grote Markt), the Royal Palace (Palais Royal) and the iconic bronze known as the Manneken Pis. Also try not to overlook the port city of Bruges and its glorious town hall, the lively Latin Quarter and imposing cathedral in Antwerp, and the market squares in Leuven, which become nothing short of open-air drinking terraces in the summer months. More information about Ghent Attractions Nearby.