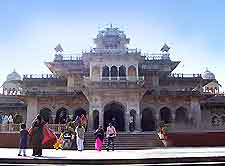 Many impressive collections are housed within the museums in Jaipur. Amongst the most popular is the Jaipur Dolls Museum, which offers a taste of beautifully made toys and dolls from yesteryear, amongst other intriguing exhibits.

One of the city's premier cultural attractions, the historic Central Museum is full of local heritage and features numerous local Indian treasures from around the Rajasthan region.

The main museums are described here. 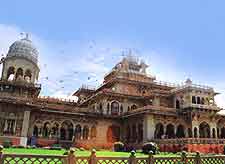 Address: Albert Hall, Ramnivas Gardens, Jaipur, India, IN
Often known as the Albert Museum due to its location inside the Albert Hall itself, the Central Museum is actually based upon London's famous Victoria and Albert Museum. Highlights include many royal portraits, a large collection of miniature art works, traditional wood carvings, tribal ware, musical instruments, period costumes and old drawings of the area. Guided tours operate between the hours of 10:30 to 16:30.
Open hours: Saturday to Thursday - 10:00 to 16:30
Admission: charge, free on Monday

Address: Jawahar Lal Nehru Marg, Jaipur, India, IN
The Jaipur Dolls Museum is home to an extensive collection of dolls from around the world. This attraction is close to the Police Memorial and is always popular with families. The Dolls Museum is located on the outskirts of the city and was established in 1974, being amongst the most popular of its kind in the whole of India, also featuring various national costumes and dresses.
Open hours: daily - 12:00 to 19:00
Admission: charge

Address: 1670 Maniharon ka Rasta, Jaipur, India, IN
Home to a fascinating and rather eclectic array of artefacts, visitors to the Shree Sanjay Sharma Museum can expect to find more than 100,000 different manuscripts and many bookstands. Displayed in a number of rooms, you will also discover a wealth of 18th-century shoes, historic games, yoga paintings and many other rather unexpected treasures.
Open hours: daily - 10:00 to 17:00
Admission: charge