Jaipur is an enormous city in northern India, with a population of more than two million people. Located on the eastern side of the Rajasthan state, where it has become the capital city, Jaipur was established in the early 18th century and was actually India's very first planned city.

Laid out with wide streets and divided into six main quarters, Jaipur is easy to find your way around and lacks the many winding streets and lanes that you will find in other Indian cities of its age.

Within Jaipur itself, the walled Old City area can be found on the north-western side and is steeped in history. The more modern districts stand to both the west and also to the south, with the main thoroughfares in this part of the city including the Station Road, the Sansar Chandra Marg, and also the Mirza Ismail Road, often better known as simply MI Road.

Jaipur lies just over 250 km / 155 miles to the south-west of Delhi and is also relatively close to Bhopal, Indore and Nagpur. Tourists choosing to drive outside of Jaipur will be well advised to take a map, which are readily available from one of the main bookstores along MI Road. Agra and its magnificent Taj Mahal is also within driving distance of Jaipur, being approximately 230 km / 143 miles from the city environs. 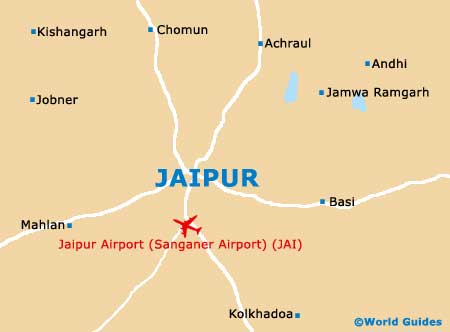