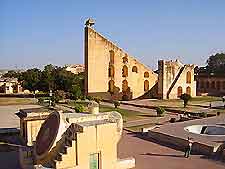 Along with plenty of historic forts and ancient temples, Jaipur offers a thriving tourism scene and plenty of tourist attractions for visitors to enjoy. Look out for the camel rides, which are particularly spectacular at sunset, together with a range of recreational activities, such as boating and horse riding. Other popular tourist attractions in Jaipur include stargazing at the Birla Planetarium and Indian Masal movies at the Raj Mandhir Theatre.

For stunning views of Jaipur's cityscape, visit the Iswari Minar Swarga Sal (Heaven Piercing Minaret) and make sure that you bring your camera. Jaipur's most memorable tourist attractions are described below. 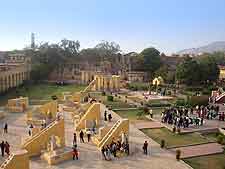 The Jantar Mantar Observatory is situated close to the City Palace complex and was completed in 1733, being filled with astronomical artefacts and instruments. The biggest of four remaining similar observatories dotted around India (Delhi, Ujjain and Varanasi), the main attractions within Jaipur's Jantar Mantar Observatory include an enormous 27-metre / 89-foot sundial, fascinating geometric devices and a small Hindu chhatri. To make the most of your visit, guided tours are recommended and last up to one hour.
Open hours: 09:00 to 16:30
Admission: charge, free on Mondays

Offering an enjoyable audio-visual experience, visitors to Jaipur's Birla Planetarium will enjoy its many astronomical attractions, which range from star constellations to the solar system as a whole, using state-of-the-art technology. The Birla Planetarium is actually part of the Birla Science and Technology Centre and is sited close to the city's Statue Circle.
Open hours: daily - 12:00 to 19:00
Admission: charge 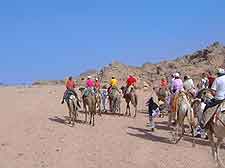 Tourists staying in Rajasthan will immediately realise that camel rides are amongst the most popular tourist attractions and enjoyed by many. A number of sandy deserts lie close to Jaipur, where companies operating camel safaris are easy to find. Led by trained guides, camel rides are a romantic and enjoyable way to learn more about the area surrounding Jaipur. Be sure to bring your camera and hold on tight where the camel prepares for you to dismount.
Open hours: daily - hours vary
Admission: charge

Rajastan's leading movie theatre, the Raj Mandhir Theatre is also extremely popular and can become quite crowded at times. When watching a typical Masala film here you can be sure of a memorable experience, with noisy crowds who are constantly cheering and clapping.
Open hours: hours vary
Admission: charge, concessions

Close to the Tripolia Gate and within the Old City area of Jaipur, the Iswari Minar Swarga Sal has an interesting history, being built by the son of Jai Singh. Many people visit this attraction to climb to the top and enjoy the stunning views across the Old City. The entrance to the Iswari Minar Swarga Sal is located at the back and off the Chandpol Bazaar.
Open hours: daily - 09:00 to 16:30
Admission: charge

One of Jaipur's most famous tourist attractions is the Moti Doongri Temple, which lies close to the very heart of the Old City district. Enjoying a hilltop setting and affording good city views, the Moti Doongri Temple resembles an English castle in style and is still owned by the royal family. Although tourists are not able to view the interior of the fortress, the white marble is impressive in its own right, appearing to glow at night-time. Nearby attractions include the Ganesh Temple and also the Birla Mandir shrines.
Open hours: daily - view from outside only
Admission: free