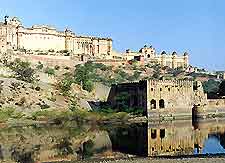 Famous for its many striking pink sandstone buildings, landmarks and monuments, Jaipur boasts a number of fairy-tale palaces and magnificent historical buildings. Amongst the most famous landmarks in the whole of Jaipur is the Hawa Mahal (Palace of the Winds), where the top floors offer glorious views across the City Palace, the Jantar Mantar and the Siredeori Bazaar.

The City Palace is also especially impressive and comprises the Govind Dev Ji Temple, where various religious events take place each day, with gifts of sweets offered to the gods. Other prominent landmarks and important monuments in Jaipur include the Amber Fort, Jaigarh Fort and Royal Gaitor Cenotaphs, all of which are described below. 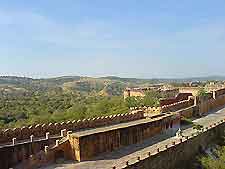 The magnificent delicate-pink palace of Amber stands just outside of Jaipur, on the northern side of the city. The Amber Fort (pronounced Amer Fort) was built at the very end of the 16th century by the Maharaja Man Singh and boasts two separate palaces - the 'Summer Palace' and the adjacent 'Sheesh Mahal' or 'Winter Palace'. Also of interest are a number of large halls, a temple and various surrounding gift shops. Expect a ten-minute climb to reach to fortress itself, although jeep rides are available for a small charge, and do watch out for the monkeys, who can be a little over friendly.
Open hours: daily - 09:00 to 16:30
Admission: charge 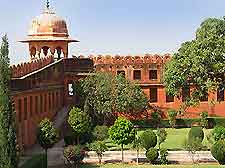 Located on the very outskirts of Jaipur and built in 1726 by Jai Singh, the Jaigarh Fort was once a strategic part of the region's military defence and features the biggest cannon in the world. Overlooking the Amber Fort and beyond, many people visit this landmark for the views and photo opportunities alone, while for others, the collection of military artefacts, medieval cannons and enormous underwater tanks are of particular interest.
Open hours: daily - 09:00 to 17:00
Admission: charge, admission free with ticket to City Palace 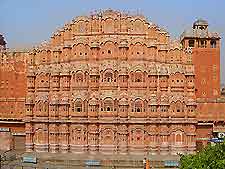 Hawa Mahal (Palace of the Winds)

One of the most spectacular landmarks in the whole of Jaipur's Old City, the Hawa Mahal offers breathtaking pink-sandstone architecture, dating back to 1799. With five storeys and a grand entrance complete with courtyard, the Hawa Mahal is famous for its many small windows, which number almost 1,000 and provide the palace with a cooling breeze, earning it is nickname of the 'Palace of the Winds'. Within the Hawa Mahal there are actually no stairs, only a series of ramps.
Open hours: Saturday to Thursday - 09:00 to 16:30
Admission: charge 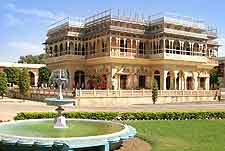 Tel: +91 0141 260 8055
The Jaipur City Palace features a series of gardens and courtyards, and comprises a number of imposing buildings, surrounded by a historic outer wall. Sited alongside the Hawa Mahal and within the aptly named Palace Quarter, the City Palace is home to the Govind Dev Ji Temple, a grand temple dedicated to Krishna and constructed at the end of the 19th century.
Open hours: daily - 09:30 to 17:00
Admission: charge, discounts for children under 12, children five years old and under are free 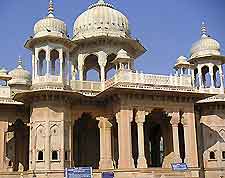 Built in the 1730s and later extended during the mid-19th century, Nahargarh Fort boasts exceptional views of the Jaipur cityscape and memorable sunsets. Enjoying an elevated setting on the northern side of Jaipur, inside you will find many interesting rooms, full of period furnishing and antiquities. Nahargarh can be reached either by road or from a winding, scenic 2-km / 1.5-mile pathway.
Open hours: daily - 10:00 to 17:00
Admission: charge 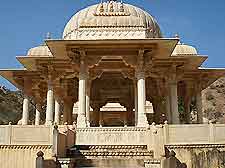 The Royal Gaitor is a spectacular palace lying on the very outskirts of Jaipur, within a narrow valley. Here you can enjoy a world of white marble, with the main landmarks including the Maharaja Jai Singh II Chhatri and the enormous Sawai Jai Singhji Chhatri, which is known for its carved stone pillars. Various other tombs are located around the Royal Gaitor grounds, offering a glimpse of the grandeur of yesteryear. This tranquil spot is surrounded by a small, spreading village.
Open hours: daily - 09:00 to 16:30
Admission: charge