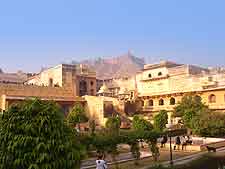 Jaipur is a particularly important city in India, due to its organised layout and structure, which contrasts with the tangle of lanes and alleys found in most Indian cities of its size. Various districts and neighbourhoods are spread around Jaipur and are easy to explore.

Urban Jaipur offers a gridwork of interconnecting streets, with prominent regions known as quarters, lying to the north, south, east and west. The Central Palace district is located at the very heart of Jaipur and contains many of the city's most famous landmarks and sights. The most significant districts, locations and neighbourhoods in Jaipur are described here. 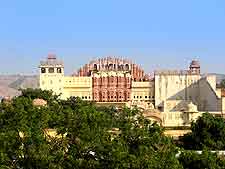 The Old City of Jaipur is partially enclosed by a wall of battlements, which feature a series of recently restored gateways, including Ajmer, Chandpol and Sanganeri. Often known as the pink city, due to its high concentration of pink-coloured sandstone architecture, this appealing district of Jaipur offers organised streets and avenues, dividing much of the area into a series of rectangles. Highlights within Jaipur's Old City include a series of bazaars, such as the Bapu, Chandpol and Johari, along with the grand minaret on the Iswari Minar Swarga Sal, and the spectacular Hawa Mahal, a fairy-tale style landmark typically built with pink sandstone. Nahargarh Fort stands high above much of Old City Jaipur on the north-western corner.

Standing on the north-western side of the city, the Bani Park lies close to the Chandpole Gate and is much more than just a parkland. Home to a good selection of cheap hotels and guest houses, this area of Jaipur also features plenty of fine dining and a number of notable shopping centres, such as the Kripal Kumbh.

To the south-east of Bani Park and south of Mirza Ismail Road (MI Road), Jaipur's Ashok Nagar is centrally located and a good place to base yourself. With various accommodation options all around Ashok Nagar, look out for the Rajasthan Tourism Development Corporation (RTDC) Tourist Hotel, which is especially popular. The Juneja Art Gallery can also be found within this quarter.

Jaipur's Palace district is where you will find the spreading and rather spectacular complex that is the Hawa Mahal ('Palace of the Winds'), next to the City Palace wall. Also within this district are the Govind Devil Temple, the Chaughan Stadium, the Tripolia Gate and Bazaar, and the Foreigner's Regional Registration Office.