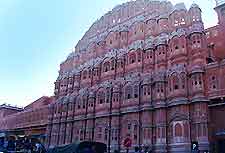 Festivals are commonplace all through the year in Jaipur and throughout Rajasthan. Visitors lucky enough to experience one of the region's largest festivals and events will find plenty to enjoy and things to do, ranging from costumed processions through the streets of central Jaipur, kite-flying demonstrations, livestock markets and fairs with cattle and camels, and many fireworks displays.

Particularly popular in the Jaipur region is the Camel Festival each January, the Elephant Festival in March, and also the Gangaur Festival, which lasts for 18 days and features local girls dressed in their finest attire. Jaipur's main events are described below month by month.