The capital of the arid Indian 'princely state' of Rajasthan, Jaipur is home to over two million people and is one of the most charming of all Indian cities due to its wide boulevards and careful city planning.

Its modern history as a settlement began in 1727 with its founding by Maharajah Sawai Jai Singh II as his royal base. The Palace Quarter established by the ruler is one of the city's major attractions, with the hilltop Nahargarh Fort being his first residence.

Before moving his capital to Jaipur, the Maharajah was highly regarded for his academic studies, referenced classical Hindu treatises (written works) and books on architecture. He later became well-known for planning his city on a grid pattern, as well as designing his palace and other grandiose buildings.


Jaipur's history hinges on his vision and that of his architect, Vidyadhar Bhattacharya. The city's design was based on the Indian Shilpa Shastra architectural guidelines with its massive city walls, seven gates, wide streets and magnificent buildings all being part of a highly advanced concept at the time. 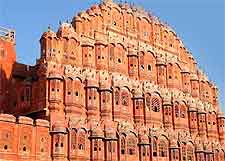 Commercially, the city was affected by the growing dominance of the British Raj and the East India Company. However, several rulers of the princely states in the north-east of the country, including the Maharajah of Jaipur, negotiated a treaty with the British in 1818, under which they had retained their status and control. As Jaipur grew larger and its population spread outside the city walls, the resulting water shortages were later solved by the construction of Ramgarh Lake.

Recognised as the most splendid city in India by the late 19th century, Jaipur attracted artists in marble and metal, along with communities of bankers, with its population growing to 160,000 by the end of the century. In honour of a visit by the Prince of Wales in 1876, the entire city was painted a glorious shade of rose pink, giving rise to its 'Pink City' nickname. To the present day, the glowing colour is still visible along its broad, tree-lined boulevards and on its heritage buildings.

The 20th Century and Beyond

The early 20th century saw a surge in construction in the city, with colleges, schools, hospitals, a secretariat and public buildings springing up. After Indian independence was declared, Jaipur was merged with Bikaner, Jodhpur and Jaisalmer, forming the Rajasthani Union. The then Maharajah Man Singh II was elevated to Rajpramukh and given control of the newly-formed province until 1956, when his title was revoked. At this point, Jaipur took its present position as the capital of the state.

Nowadays, Jaipur is one of the most-visited cities in India for its history and beauty. The spectacular Amber Fort (Amer Fort), the original palace of the city's founding dynasty from the 1590s to 1727, is now within its boundaries, as is the impregnable Jaigarh Fort, with Nahargarh Fort giving the best views over the sprawling city.

The breathtaking City Palace is a mix of Mughal and Rajput architecture, encompassing the history of Jaipur in its splendour, with the Chandra Mahal serving as the home of the present maharajah.