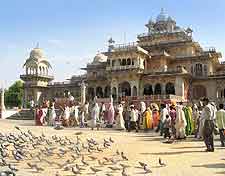 Sited within eastern Rajasthan, North India, the city of Jaipur is famed for its hilltop fortresses, magnificent royal palaces and historic pink-painted sandstone architecture, earning it the affectionate nickname of the 'Pink City'. The buildings within the Old City district of Jaipur were first painted pink in 1876 to welcome the current Prince of Wales, and this tradition has remained ever since.

Jaipur was established in 1727 and it was the country's very first planned city, featuring a particularly organised structure and network of roads. Full of atmosphere, Jaipur features many wandering cows and camel carts, which are a regular sight all over the city and often being the cause of traffic congestion.

Tourists visiting Jaipur can expect to see many brightly coloured turbans, elegant and fluttering saris, bustling bazaars and some of the best shopping in the whole of India. For the latest tourist information in Jaipur, search out the official tourist offices, such as the Rajasthan Tourism Development Corporation (RTDC) and also the Government of India Tourist Office. Further tourist information is available at Jaipur's airport and bus station, where city maps can also be obtained. 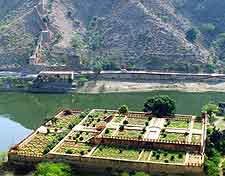 Within central Jaipur, many of the city's best tourist attractions can be found off the MI Road, the Sansar Changra Marg, and also close to the Jaipur Train Station. Tourists will enjoy camel rides and safaris on surrounding stretches of desert, sky shows at the Birla Planetarium, the scientific instruments and displays at the 18th-century Jantar Mantar Observatory, exotic animals and lush gardens at the Ram Niwas Bagh and Zoo, and traditional Masala films at the Raj Mandhir Theatre. Both the Iswari Minar Swarga Sal (Heaven Piercing Minaret) and the Moti Doongri Temple are also extremely popular tourist attractions in Jaipur. More information about Jaipur Tourist Attractions.

Boasting a delicate-pink facade and two adjacent palaces, the Amber Fort lies on the outskirts of Jaipur and is amongst the region's main landmarks, along with the magnificent Jaigarh Fort, which dates back to 1726 and offers superb views and the world's largest cannon. Within central Jaipur, the Hawa Mahal is especially famous and is often known as the 'Palace of the Winds', due to its enormous number of windows. Also worth visiting in Jaipur is the City Palace and its Govind Dev Ji Temple, the Nahargarh Tiger Fort, and the many tombs at the Royal Gaitor Palace. More information about Jaipur Landmarks. 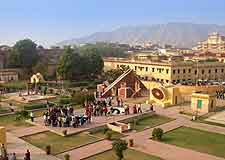 Museums within Jaipur are extremely varied and offer in-depth information about a range of different subjects, with the Dolls Museum and its many toys always being popular with families. The Jaipur Central Museum is amongst the best and contains a mixture of paintings, carvings, tribal artefacts and period costumes. For folk art and many other treasures, the neighbouring RC Museum of Indology is worth a look. Specialising in contemporary paintings and sculptures, both the Juneja Art Gallery and the Modern Art Gallery offers plenty to enjoy, regularly hosting visiting exhibitions. More information about Jaipur Museums and Jaipur Art Galleries.

Jaipur is well placed to explore North India, tourists will discover many exceptional attractions, located within prominent towns and cities. Keen 'twitchers' (bird watchers) and animal lovers should not miss the wildlife within Keoladeo Ghana National Park and the Sariska Tiger Reserve. For a true change of pace and something quite different to the pace of life in Jaipur, Shekhawati is a peaceful spot and good for trekking and picnicking, featuring many huge Banyan trees. Further afield and yet still easy to reach from Jaipur, the hustle and bustle of New Delhi, India's capital, truly has something for everyone, while Agra is famous the world over for its simply awesome Taj Mahal complex. More information about Jaipur Attractions Nearby.