Getting Around, Algeria Travel, Transport and Car Rental 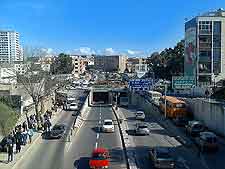 The best way for visitors to arrive in Algeria, and to travel around the country, is by plane. For those who wish to travel to Algeria by ferry transport or overland, it is advisable to check as to which entry points will be open, since this situation tends to change on a fairly frequent basis.

The difficult security situation in Algeria in recent years has meant that travel and transport within the country has become more limited. Guided tours are recommended and are often the safest way of travelling around certain parts of the country, including the southern Saharan region. 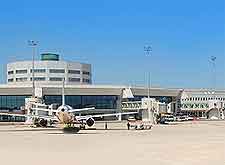 Most visitors choose to arrive at Algiers Airport, which is situated a short distance from the capital city. Also known as the Houari Boumediene Airport, this busy facility offers a variety of international routes, including London to Algiers. Taxis and buses are available to transport visitors into the city. The travel time of this journey is approximately 30 minutes.

It is also possible to travel on to other airports in Algeria, including Annaba, Oran and Constantine. Visitors to the south of Algeria can fly directly from Europe or change planes at Algiers. The country's principal airports are as follows: 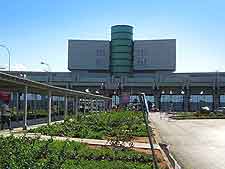 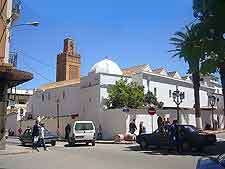 For those choosing to enter Algeria by car, the main entry points are Maghnia, Soutk-Ahas, El-Kala, In Guezzam, Fort Thiriet and Bordj Mokhtar. It is worth checking on driving regulations before you travel. In particular, an international driving permit is required.

A car is also handy if you are planning to enjoy a few day trips during your stay. Car hire is available at Algiers Airport and at many of the larger hotels in this capital city. It's worth thinking about the sort of terrain you will be driving through, as this will influence your choice of vehicle. Before you travel, it is also advisable to check the current security situation. Drivers should take care, since Algeria's roads are not known for their safety. 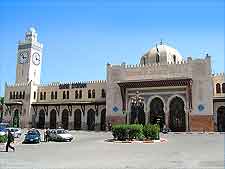 Train services operate from Algiers' two main stations - the Gare Centrale and the Gare de l'Agha. From there it is relatively straightforward to travel to several main towns and cities in Algeria, including Annaba, Oran and Tlemcen.

In Algiers, buses and trams are a useful way of getting around the city. As well as the main train station, visitors can catch buses from the Place des Martyrs, the Place Grande Poste and the Place Audin.

If you want to head further afield, the main bus station is situated outside the city centre and has relatively good facilities. From there, it is possible to catch buses to other major towns and cities, including Oran, Annaba and Ouargla.

Whilst public transport in Algiers is quite good, visitors should note that buses outside the capital city can be quite unreliable. 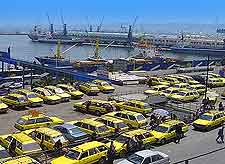 There is no shortage of taxi transport in Algiers. Taxi fares are metered and visitors should note that costs may increase at night. A good place to catch a taxi is around Port Said, where communal taxis regularly connect the train station. It is also popular to travel by communal taxi to other towns and cities nearby Algiers, such as Oran and Constantine.

It is quite possible to travel to Algeria by ferry. The most common route is between Marseille and Algiers. This particular journey takes around 21 hours in total. Algeria's ferries can also be a useful way of getting around the country, with a number of coastal ports offering regular services.