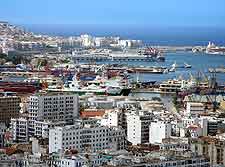 Algeria can be divided into four districts or regions; these follow geographical boundaries and offer a useful way of orienting yourself in what is the second largest country in Africa.

In the north of Algeria is the narrow coastal Tell region. This is where most of Algeria's cities and towns, including Algiers, Oran and Annaba, can be found. Below this coastal zone is Algeria's mostly barren High Plateau region. By way of contrast, north-eastern Algeria offers a striking landscape of mountains, plains and basins, as well as some interesting towns and cities. These include the likes of Constantine and Djemila.

Finally, the vast Sahara region of Algeria extends south of the Saharan Atlas, right down to Niger and Mali. As you would expect, there are sand dunes in abundance. Look out too for the area's rocky plateaus, deep gorges and pebble deserts.

Since the Algerian Civil War in the 1990s, the country has been subject to a number of security threats. As a result, visitors are advised to check as to the safety of the area they are planning to visit. Some travel restrictions may be in place. 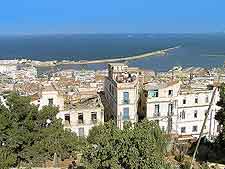 The capital of Algeria, Algiers, is a lively city with plenty to see and do. In terms of its architecture, Algiers is something of a city of contrasts. On the one hand, Algiers is home to some fine French colonial style architecture, with its stunning white facades and broad boulevards. On the other, there are the winding, narrow alleys of its ancient Casbah, complete with Turkish palaces. Overall, Algiers has some surprisingly good museums and art galleries. Several of its mosques are also well worth a visit and visitors shouldn't miss out on the magnificent views of the Mediterranean that Algiers offers. More information about Algiers. 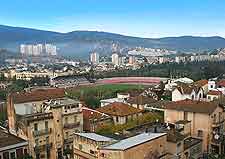 Located on the coast, in the north-east of Algeria, Annaba is a thriving port town. Must-sees in Annaba include the Basilica of St. Augustine. As well as dominating the town, the church is famous for being the reputed resting place of Saint Augustine's hand. Behind the church are some interesting Roman ruins. La Place des Armes is one of the oldest parts of Annaba, with some buildings dating back to the 12th century. After a stroll around the town's many alleyways, there are plenty of chances to relax. Annaba's Le Cours is a popular place to sit and enjoy an ice cream, whilst the town's beaches offer cool air by day and lively restaurant life by night. 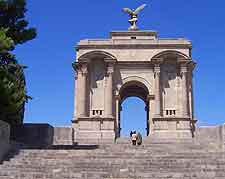 Located in north-eastern Algeria, Constantine is the third largest city and a popular visitor destination. The city boasts an interesting past, which stretches back to Carthaginian times.

Standing atop a mountain, Constantine has a casbah, palace, mosques, and an interesting museum. Nearby are the Roman ruins of Tiddis. 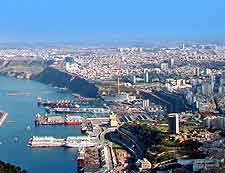 Algeria's second-largest city is somewhat off the main tourist route. Indeed, Oran is perhaps best known for being the birthplace of the North African 'rai' music movement. Nevertheless, Oran is well worth a diversion, featuring particularly impressive historical attractions. These include its Great Mosque, built in 1769 and open to the public, and the Palais de la Culture. The beautiful domed Cathedral de Sacré Coeur was converted into a library shortly after Algerian independence and is also a good place to while away some time. The Place du 1er Novembre is Oran's main square and a popular destination for those newly arrived in town.

Aside from the city's heritage, Oran is a bustling city with plenty to do, including theatre performances and restaurants. In the summer months, Oran's sandy beaches are a popular way to escape the heat. 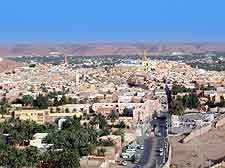 Located around 600 km / 375 miles south of Algiers in the Mzab Valley is Ghardaia. Listed as a World Heritage Site since 1982, the town is a popular tourist destination. Originally a fortified Berber medieval oasis settlement, the town's main landmarks today include an interesting market and a beautiful underground mosque, where it is possible to escape the summer heat. The Mzab Valley's towns, including Ghardaia, are particularly well known for their colourful carpets. 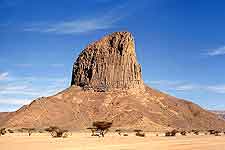 Tamanrasset is located deep in the Sahara Desert in southern Algeria. As the largest Tuareg settlement, this desert town has plenty of charming features.

The town is also the gateway to the Ahaggar Mountains. Visitors to Tamanrasset shouldn't miss out on a chance to explore the desert. Hire a guide and you will be rewarded with sandy landscapes, some notable prehistoric rock art and the opportunity to witness spectacular sunsets. 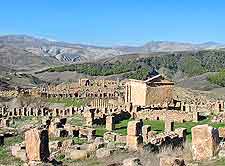 Once a spectacular Roman city known as Cuicul, Djemila is nowadays a small village set amidst the mountains of the northern coast of Algeria.

The village is home to some very well-preserved Roman ruins, including Roman baths, forum and a temple. 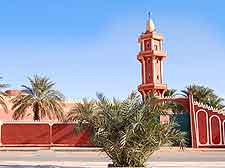 Timimoun has everything a desert village should have. As well as lines of distinctive red mud buildings, this pretty oasis is surrounded by sand dunes and palm trees aplenty. At sunset, the ancient salt lake becomes a sea of red waves.

The southern Algerian town of Ouargla is known as the 'golden key to the desert'. Its main features include some rather wonderful architecture, including a malakite minaret and a bustling market square. 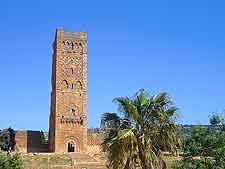 Located in north-western Algeria, Tlemcen was once the capital of central Maghreb and a thriving trading town.

There's still plenty to see in the town, including the Great Mosque, built in the 12th century, and the Mechouar, which was originally the site of the governors' palace. Just out of town are the ruins of Mansourah. This ancient walled town once covered a vast area.