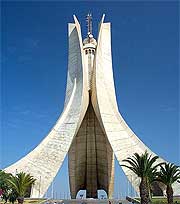 However, Algeria's greatest draws are undoubtedly the sand dunes of the Sahara Desert region. It is well worth incorporating at least one trip into this area to experience all that it has to offer.

Visitors who plan to spend some time in the capital city of Algiers won't be disappointed either. This city is home to a number of striking mosques and further landmarks, the best known being it is ancient Casbah. 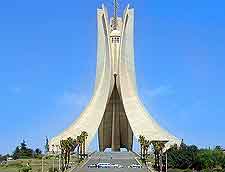 Address: Riadh el-Feth, Algiers, Algeria, DZ, North Africa
This impressive monument to the Algerian war for independence is one of Algiers' most unmissable landmarks. It was first opened to the public in 1982, 20 years after Algeria was granted independence. The Makam Echahid (Monument des Martyrs) remains a popular destination for visitors to the city and comprises three enormous concrete palm leaves, which curve as they join together and rise up almost 100 metres / 328 feet in height.
Open hours: daily
Admission: free 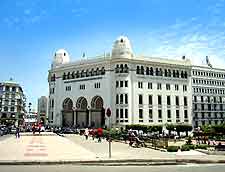 Address: Place Grande Poste, Algiers, Algeria, DZ, North Africa
Built in 1910 by Voinot and Tondoire, this is certainly no ordinary post office and really does capture your attention. Its white neo-Moorish styling and highly decorative interior is perhaps Algiers' most famous landmark. A popular tourist destination for its architecture, the building still plays a central role in life in Algiers.
Open hours: Saturday to Wednesday - 08:00 to 19:00, Thursday - 08:00 to 13:00
Admission: free 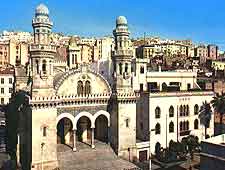 Situated on a hill, the Casbah is an impressive sight. This must-see for visitors to Algiers is made up of a collection of architecture, including houses, palaces and mosques, many of which date back to the Ottomon period. As well as the Ketchaoua Mosque, built in the 18th century, there are also plenty of narrow alleys and picturesque houses to admire. The Casbah is divided into two areas - an upper and a lower town. Its labyrinthine layout means that it is easy to lose oneself, so it is advisable to visit with a guide or as part of a tour, to make the most of your time in this fascinating place. In 1992, the Casbah became a UNESCO World Heritage Site, with plans to renovate many of its crumbling buildings.
Open hours: daily
Admission: free (charges made for guided tours) 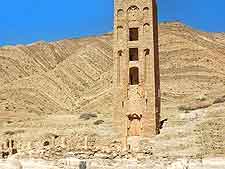 Address: Algeria, DZ, North Africa
Whilst little remains of the first capital city of the Hammadid rulers of the 11th century, the surviving ruins do give visitors an opportunity to get a glimpse into life in an ancient fortified city. The city was reputed to have been home to the largest mosque in Algeria. Situated some 225 km / 140 miles south-east of Algiers, the importance of this site was recognized when it achieved World Heritage Site status in 1980.
Open hours: daily
Admission: free 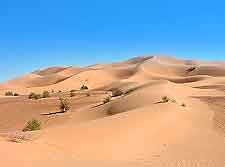 Address: Saharan Lowlands, Algeria, DZ, North Africa
If you are fascinated by pictures of Saharan sand dunes, then a visit to the Grand Erg is a must. Covering a vast area in north-east Algeria, this 'field of sand dunes' is perhaps one of the country's most spectacular natural landmarks. On the northern edge of the Grand Erg is El-Oued, a picturesque oasis town that is best known for its domed architecture.
Open hours: daily
Admission: free 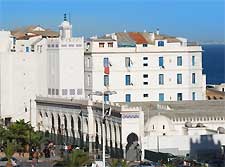 Address: Rue el-Mourabithine, Algiers, Algeria, DZ, North Africa
The Great Mosque (Jamaa el-Kebir) is the oldest of Algiers' mosques. An inscription inside shows that the building existed as far as back as the 11th century, although it has to be said that the mosque has been much altered since then. The minaret is said to be the work of the Sultan of Tiemcen in the 14th century.
Open hours: daily
Admission: charge 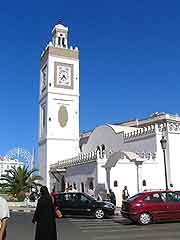 Built in the shape of the Greek cross, the New Mosque (Jamaa el-Jedid) has an especially impressive minaret, which extends some 27 metres / 89 feet into the air.

The term 'new' actually refers to the fact that it was built in the 17th century, many hundreds of years after the Great Mosque.
Open hours: daily
Admission: charge