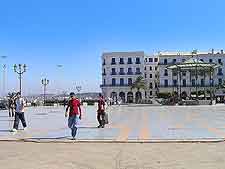 Algeria's calendar of events has become somewhat depleted during recent years because of internal conflict. Nonetheless, it is still possible to enjoy a wide range of things to do, festivals and fairs, many of which celebrate the culture, music, crafts and food of Algeria. In fact, there are reported to be over 200 small, local festivals held throughout the country at some time during the year.

This country also stages several high-profile sporting events, as visitors converge on Algeria to test their stamina in the hostile desert environment.