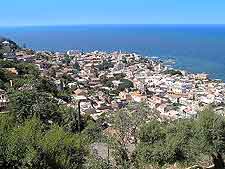 An Arab and Berber country situated within North Africa, the northernmost area of Africa, the country of Algeria borders the surrounding African countries of Libya, Mali, Mauritania, Morocco, Niger and Tunisia, as well as the Western Sahara area.

The northern shore of Algeria is edged by the Mediterranean Sea, which stretches for over 700 miles / 1,125 km and is home to a number of popular beach destinations. Across the Mediterranean and to the north / north-west of Algeria is Spain and its relatively nearby coastal resorts of Almeria, Cartagena, El Ejido, Mazarron and Malaga.

In the centre of Algeria's lengthy northerly coastline is the capital city of Algiers, which is known for its multitude of white high-rise buildings overlooking the seafront. The harbourfront is an important point of reference in Algiers and a total of four busy interconnecting roads run parallel to the seafront, changing names along the way.

Those looking for the Medina area of Algiers will find it located between the Rue Ahmed Bouzrina and the Boulevard de la Victoire, while for tourist information and maps, the Rue Didouche Mourad is the place to come. 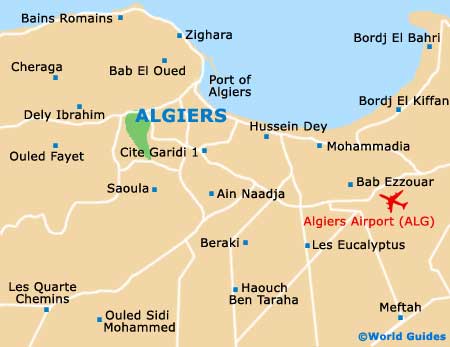