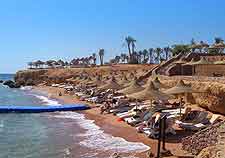 Most people head to Sharm el Sheikh for sun, sea, blue skies and waterfront tourist attractions. Sharm el Sheikh is largely a resort city catering to tourist needs, with top-class hotels and fine restaurants. However, in Egypt you are never far away from historical attractions or religious wonders.

There are many popular tourist attractions and hotspots around the city of Sharm el Sheikh, which never fail to draw in the crowds. After a day of scuba diving or snorkelling in the surrounding clear, turquoise waters, or simply sunbathing on the beach, be sure to head to the Burning Bush or take a day out and visit a national water park. Also, a trip to Mount Sinai is an absolute must for every visitor staying here. 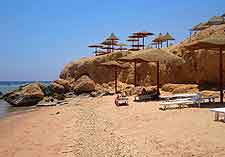 Beaches are great fun for the entire family and Sham el Sheikh offers some of the country's best coastline. Scuba diving is particularly impressive and popular in Sharm, with the coast providing clear warm waters, beautiful coral reefs and an abundance of colourful marine attractions, although it is worth noting that there have been a handful of attacks by Oceanic White Tipped sharks in recent years. For those who prefer to stay on the surface, there are snorkelling opportunities, as well as countless water sports on offer. The golden sand provides hours of amusement for children of all ages, as well as the perfect place to sit back, relax and soak up the sun.
Open hours: 24 hours
Admission: no charge 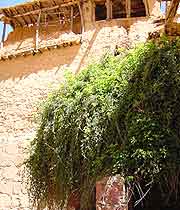 Address: St. Catherine's Monastery, Sharm el Sheikh, Egypt, EG
This biblical bush is said to have burned when God spoke to Moses for the first time. It is very popular with all visitors to Sharm el Sheikh, mainly due to its religious and historical significance.

The bush was replanted in the 10th century when the chapel was given a roof and is a must-see site. As a result of its worldly and religious fame, this has become one of the most visited and photographed sights in the whole city.
Open hours: daily
Admission: no charge 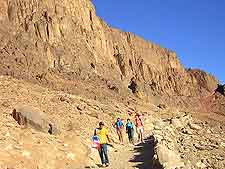 Mount Sinai, in Sharm el Sheikh, is the name of a group of peaks, often known as the Holy Mountains. However, it is also the biblical name of the peak on which Moses received the 10 Commandments. Mount Moses is considered to be the peak where Mohammed's horse ascended to heaven, meaning it also has religious significance to Islamic believers. The peak can be reached by climbing the steps leading up to the top, or by following a winding path that runs east from the monastery. The steps pass the Fountain of Moses.
Open hours: daily
Admission: no charge 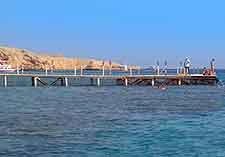 Address: Naama Bay, Sharm el Sheikh, Egypt, EG
This beautiful location is one of the major tourist attractions in the area. The bay offers stunning views, a myriad of tropical fish, plenty of water sports and a host of wildlife. Naama Bay has been very well maintained and development has not affected its character and natural beauty.
Open hours: daily
Admission: no charge 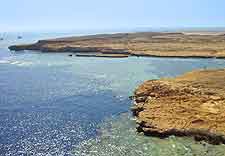 Address: Ras Muhammad Natural Park, Sharm el Sheikh, Egypt, EG
The Ras Muhammad Natural Park can be found at the southern tip of the Sinai Peninsula, 20 km / 12 miles from central Sharm el Sheikh. The park was established in 1983 to protect the coral reefs and offer both scuba divers and snorkellers the chance to swim amongst spectacular underwater scenery.
Open hours: daily
Admission: charge